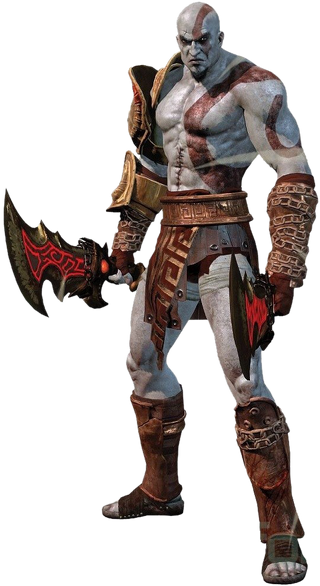 Ancient Greece knew no more bloodthirsty warrior than Kratos, who for a time was the God of War. Mortal once more, Kratos withdrew from the ages-old clash between men and gods. But his solitude was broken when he was ripped through space and time. As the madness subsided, Kratos found himself in present-day Outworld, kneeling before Shao Kahn. To ensure his victory in Mortal Kombat, the emperor had invoked an ancient ritual, sacrificing the souls of his vanguard to summon and enslave the most powerful warrior of all time. But the spell alone could not contain Kratos, who soon regained his free will. Enraged by Shao Kahn's arrogance, Kratos vowed to rip the warlord's spine from his body. The God of War had returned to battle.

Attack Potency: At least Large Building level (Killed Johnny Cage, Baraka and Sonya Blade in his ending), possibly City level (Killed Shao Kahn and was going to kill Raiden and Fujin before they paid their respects)

Intelligence: Gifted (Skilled in everything related to combat and bloodshed. He is a Spartan general)

Weaknesses: Has some anger management issues and can be blinded by it, otherwise none notable.