VS Battles Wiki
Register
Don't have an account?
Sign In
Advertisement
in: Characters, God of War, Game Characters,
and 75 more 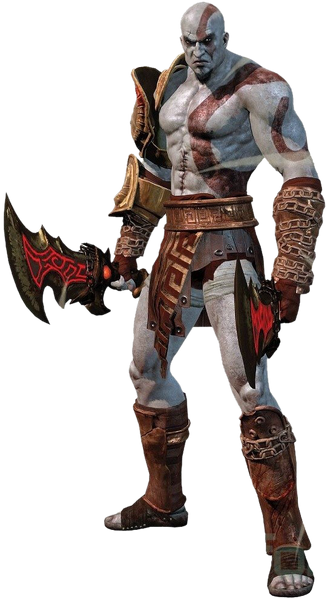 Born and raised in the ranks of the violent Spartans, Kratos became a respected general in his ranks but had to beg the God of War, Ares, during a battle with the Barbarians to avoid the Spartans' defeat. Ares listened to Kratos and bounded a pair of curved, chained blades to his forearms to physically represent Kratos' servitude to the god of war. This, however, ended as Ares tricked Kratos into slaughtering his own wife and daughter. After having the white ashes of his deceased family bound to his skin, Kratos headed out and sought revenge against his former master.

Superhuman Physical Characteristics, Magic, Acausality (Type 1; Is unfazed by the death of his past self), Non-Physical Interaction (Is capable of harming the wraith spirits), Underwater Breathing (Type 3; via Poseidon's power), Weapon Mastery, Time Manipulation and Age Manipulation (Can freeze time, as well as deage or age both enemies or objects considerably with the Amulet of Uroborus), Animal Manipulation (Wields the Head of Danaus, which can summon animals to do the wielder's bidding), Some form of Magic Dispelling, Electricity Manipulation, Portal Creation (The Soul of Hades allows him to create portals to strike foes at a distance), Explosion Manipulation (Can plant explosive cores inside his foes with The Rage of Ares), Fire Manipulation, Technique Mimicry (Was capable of replicating a technique Zeus used after seeing it once), Psychometry (Every new weapon he obtains, he instantly becomes a master with), Ice Manipulation, Duplication (via the Oath Stone of Orkos), Life, Energy, and Power Absorption (Can drain the life force and magic energies and abilities of opponents on contact with them), Statistics Amplification (Can channel his divine energy into other objects such as weapons to amplify their effectiveness), Rage Power (Capable of increasing his own strength with anger), Limited Teleportation (The clones from the Oath Stone of Orkos are able to teleport to the enemy), Summoning and Homing Attack with the Soul of Hades (Which can vaporize enemies), Limited Healing with Orkos's Cloak, Transmutation, Soul Manipulation, and Power Nullification via the Soul of Hades (Able to summon the Arms of Hades, which have the ability to transform the alive into mindless Underworld soldiers or fragilized souls of the damned, as well as strip people off their magic and nullify magic abilities of weapons)

Resistant to the Following: Fire Manipulation (Is unfazed by the burning fire of Hades from a monster out for his head), Poison Manipulation and Acid Manipulation (Can overpower the effects of the manticore's acidic poison), Age Manipulation (Can overpower the effects of the Amulet of Ouroboros, which can decay those that get hit by the spell), Time Stop (Overpowered the abilities of the Amulet of Uroborus several times in his fight against Castor & Pollux, which was also confirmed by the developers), Petrification (Can break out of gorgon petrification), Electricity Manipulation (Can power through the Siren's electric shriek), Transmutation, Soul Manipulation, and Power Nullification (Is capable of fighting off the effects of the Hands of Hades, which can transmutate people into lost souls, and strip others of their powers), Illusion Creation, Perception Manipulation and Reality Warping (Can resist the illusions of the Furies with the Eyes of truth, which is stated to warp the victim's senses and even distort the area around them)

All previous powers, Energy Manipulation (via Charon's Wrath), Attack Reflection (The Sun Shield can reflect attacks and projectiles), Fire Manipulation, Holy Light Projection with the Light of Dawn, which ignores the durability of demons or demonic creatures

all previous powers, Electricity Manipulation (Via Zeus' Fury and Poseidon's Rage), Deconstruction (via Poseidon's Rage), Power Nullification (With Zeus' Fury), and Petrification (via Medusa's Gaze), Dimensional Storage (Houses all the equipment and magic he's acquired throughout the games), Resistance Negation (Was capable of overcoming his own resistance to conceptual manipulation when he plunged the Blade of Olympus into himself and released Hope itself to all of Humanity), Conceptual Manipulation (Type 1; Is capable of using Hope as a weapon against Fear Zeus and banished Fear itself, Hope is considered the most powerful thing in the God of War verse, surpassing even the Primordials, who are abstract concepts that predate reality itself), Abstract Existence (Type 2; Gained Hope itself, and is unable to die as long as Hope exists) Advanced Non-Physical Interaction (Can harm Fear Zeus with Hope), Regeneration (At least Low-Mid), Immortality (Types 1, 2, 3, 4, and 8; Can no longer die so long as Hope exists), Resurrection (As long as aspects of his mind, such as his soul and body, still exist, Hope will bring him back to life. Therefore, this is effective even against high-level Matter Manipulation hax or the likes), Immortality Negation (Type 5 and 8; Is capable of bypassing Fear Zeus' immortality, and is far superior in potency than the Flame of Olympus, which can kill Pandora, a being that's neither alive nor dead)

All previous resistances, plus Resistance to Power Nullification, Memory Manipulation and Mind Manipulation (Should be able to resist the power of the Lethe River, which can erase a person's memory from existence), Fear Manipulation, Conceptual Manipulation (Type 1), and Possession (Easily resisted and ignored the effects of Fear Zeus, who was possessed by the very evil of Fear from Pandora's Box and was using it to possess Kratos with Fear before he unlocked Hope), Power Nullification or Absorption (Even after Kratos killed himself with the Blade of Olympus and released Hope to the world, he was still brought back to life by Hope. Also able to resist Fear Zeus's abilities), Resistance Negation (With the Power of Hope being stronger than the Flame of Olympus, he’s able to withstand the Flames without dying, when before it would’ve killed him despite his innate resistance to death manipulation), Precognition and Clairvoyance (After gaining the Power of Hope, Kratos was unpredictable to beings like Zeus, who was capable of predicting his death prior to gaining The Power of Hope, The Judges of Hades were also unable to judge Kratos through his heart, and they're stated to be able to do just that), Fate Manipulation (The Sisters of Fate, who determine the destinies of the Gods and Titans, were unable to use their powers to actually force Kratos to lose thanks to the powers he gained from Pandora's Box, resulting in Kratos killing them instead)

All previous powers, Can create Pseudo Black Holes/Voids, Accelerated Development (As the God of War, he can become stronger and faster overtime), Ice Manipulation and Air Manipulation (Via Boreas' Icestorm), Rage Power (After seeing Deimos's death, Kratos granted himself infinitely lasting magic and killed Thanatos), Healing, Spatial Manipulation, Life Force Absorption, and Homing Attack (via Scourge of Erinys), Soul Manipulation and Deconstruction with the Eye of Atlantis (Which destroys both the soul and the body of whoever stands in the path of its electric beam), Abstract Existence (Type 1; After killing Thanatos, the primordial concept of death, he's been labeled as Death, the Destroyer of Worlds by Zeus himself), Telekinesis (Can wipe out entire armies), Telepathy, Pocket Reality Manipulation, Can materialize various weapons out of thin air, Can sense beings thousands of miles away, Size Manipulation, Shapeshifting, and Everything Ares has

All previous resistances, plus Resistance to Ice Manipulation (Can break out of the frozen breath by the Harpies), Spatial Manipulation (resists Erinys' powers), Deconstruction (Unaffected by Poseidon's powers)

All former weapon-based abilities, plus Flight, Earth Manipulation (via Atlas Quake), Madness Manipulation (Can summon the soul of a Siren, which can drive one mad with its voice), Poison Manipulation and Acid Manipulation (via the Chimera soul summon, which the snake tail can spit out acidic poison), Forcefield Creation (via the Cerberus soul summon, where one of the Cerberus creatures with Hades' power is able to create barriers), BFR and Weather Manipulation (Wields the Blade of Olympus, which is able to warp the weather around the user, and send all the titans to Tartarus), Energy Projection, Resistance Negation (The Golden Fleece can reflect Gorgon's gaze and petrify Gorgons, who are stated and shown to be immune to Medusa's Gaze in God of War 1), Time Manipulation, Time Travel (Traveled thousands of years back to the Great War and subsequently teleported all Titans to the future), Light Projection, Invisibility and Intangibility Nullification (With the Head of Helios)

All previous powers, plus Astral Projection

Speed: At least Massively Hypersonic+ (Can react to the sirens, who can create lightning bolts), likely FTL (Word of God confirms Kratos would be superior to the Redeemed warriors even with the Essence of Hyperion, which is stated to let the user move at light speed) | At least Sub-Relativistic+ (Can react to Persephone's blast), likely FTL (Should be superior to his previous self) | Infinite (Scales to Helios) | Infinite | Infinite | Infinite (Managed to defeat the Sisters of Fate, tagging them as well as evading their attacks before they could react, even while fighting both at once) | Infinite (Managed to catch Hermes in combat and acquired his boots, defeated and demolished multiple upper-level Gods and Titans throughout the game) | Infinite (Demolished Fear Zeus in combat)

Stamina: Vastly superhuman; has the energy to climb for three days, run several dozen kilometers in search of a city and keep on fighting monsters for an entire day inside Pandora's Temple before tiring out

Intelligence: Kratos was a Spartan Commander who won many battles, and has experience battling many supernatural foes. He comes up with brutally creative ways to kill his enemies, so they won't be a future obstacle. He has also solved numerous puzzles throughout his adventures, most of them created by some of the most brilliant architects of his time, such as Daedalus, who built the Labyrinth of Minos, and Pathos Verdes the 3rd, who built the Temple of Pandora

Note: If you want to know where our high-end ratings for the God of War profiles come from, check this blog.

Soma Cruz (Castlevania) Soma's Profile (Base Soma was used, both were at Low 2-C and speed was equalized)

Hoopa (Pokémon) Hoopa's Profile (Both were High 3-A, Power of Hope Kratos and Unbound Hoopa were used, and speed was equalized)