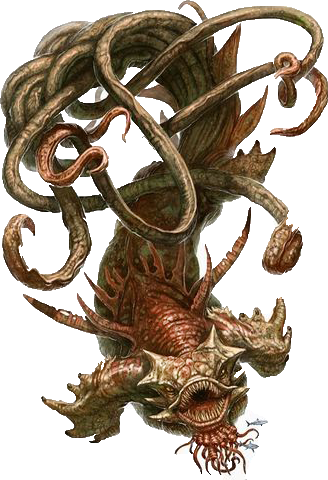 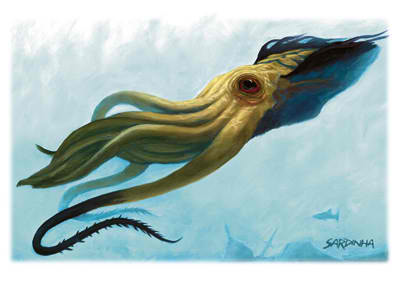 The Krakens are an ancient, feared, and ferocious race of monsters that have existed since the beginning of time, where they served as warriors to the gods. After the war of the gods ended, they went to the depths of the ocean where they wished to never be bound by beings ever again and bring terror and ferocity on their own end. Whenever a Kraken attacks, nothing can stop it, warships and galleons vanish, ocean trade and communication is destroyed, and entire villages, towns, and cities are destroyed as a side effect if they desire to go onto land to nest. Some are even virtually gods that are worshiped and have cults and minions on land and sea, a Kraken pleased with its worshipers will becalm the sea and bring with it a plentiful amount of fish to the faithful. However, the devious mind of a Kraken is ancient and destructive, ultimately always bent to the devastation of all things.

Same as before but greatly enhanced, Magic, Power Bestowal and Mind Manipulation (Can grant divine power to those misfortunate enough to submit to its power, forming them into its priests. Furthermore, the kraken can, and as long as it's on the same plane of existence, invade the minds of its priests and can replace their senses with its own), Fear Manipulation (A kraken priest's own fear manipulation comes directly from the Kraken itself), Regeneration (Low-Mid. Can regenerate its limbs), Weather Manipulation (Can alter the weather that is within 6 miles of its lair with sheer will), Empathic Manipulation (Creatures with animalistic intelligence that are within 6 miles of the Kraken's lair are charmed by the Kraken and attack intruders), Creation/Water Manipulation (The kraken's regional magic causes Water Elementals to form within 6 miles of its lair, notably, these elementals bear animalistic intellect and cannot leave the water), Resistance Negation and Weakness Granting (While within its lair, the Kraken can make each creature within 60ft of it invulnerable to lightning damage), Extreme Resistance to bludgeoning, piercing, and slashing from non-magical weapons

Lifting Strength: At least Class 10 (Can fling any adventurer, including those with superhuman strength, via its tentacles with relative ease, Can push 19050.88 kg) | At least Class K (Can push 106.69 metric tons)

Range: Extended melee range via tentacles. Up to tens of meters via lightning storm, ink cloud, and lair actions

Weaknesses: Notably slower on land, although this is only in regards to travel distance

The Kraken has the following Lair Actions 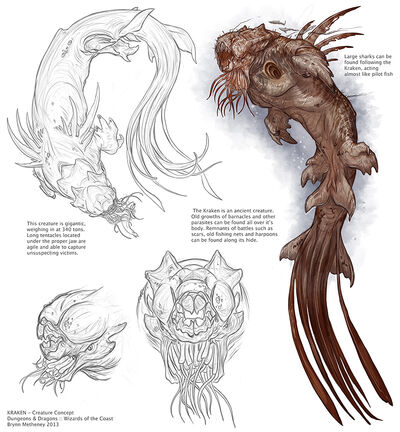 Start a Discussion Discussions about Kraken (Dungeons and Dragons)