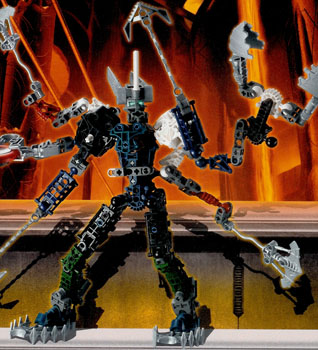 Krahka is the only remaining member of a shapeshifting species of Rahi that were wiped out by the Visorak. While she dislikes the Matoran and their Toa, she reserves a much stronger dislike for the Visorak, and just wants to be left alone.

Powers and Abilities: Superhuman Physical Characteristics, Shapeshifting (Krahka can copy the form of any being she's seen, gaining their abilities in the process, and she can merge her forms), Longevity, the powers she can use in her various forms include; Flight, Elemental Manipulation (Fire, Water, Air, Earth, and Ice Manipulation), Sealing (With the powers of a Toa, by combining all of her elemental powers, Krahka can create a Toa Seal and encase an opponent in a cage of Protodermis), can control insects, Sound Manipulation, Weather Manipulation, Heat Vision, Intangibility in smoke form, can paralyze opponents, can teleport opponents to the Realm of Shadows, and Resistance to heat

Attack Potency: Mountain level (Has fought and defeated each of the Toa Metru individually, can transform into them and use their powers, and can transform into a Troller, a worm large enough to fit city blocks in its mouth. Is superior in strength to Roodaka and fought against her, but was defeated due to her greater speed and skill).

Lifting Strength: At least Class M (Can transform into a Troller, a giant Rahi who's large enough to fit a city block in its mouth)

Stamina: Extremely high. As she can shapeshift into them, her stamina should be comparable to that of a Toa, and the Toa Mangai fought against the Kanohi Dragon for an entire month.

Range: Extended melee range, Kilometers with her abilities (Her range should be comparable to a Toa's, such as Pohatu, who destroyed the massive Odina Fortress with a single timed Stone Blast)

Standard Equipment: She can use the weapons of those she's mimicked (but not their Kanohi).

Intelligence: Krahka is an unnaturally intelligent Rahi with animalistic cunning and skill.

Weaknesses: Merging too many forms will overwhelm Krahka, as she can't handle all the thoughts and memories that come with it.

Shapeshifting: Krahka can shapeshift into the form of any being she's seen, taking on their powers and abilities in the process. She can also fuse these forms to combine their power and utilize multiple abilities at once. The many forms Krahka has taken on include:

Retrieved from "https://vsbattles.fandom.com/wiki/Krahka?oldid=5735759"
Community content is available under CC-BY-SA unless otherwise noted.