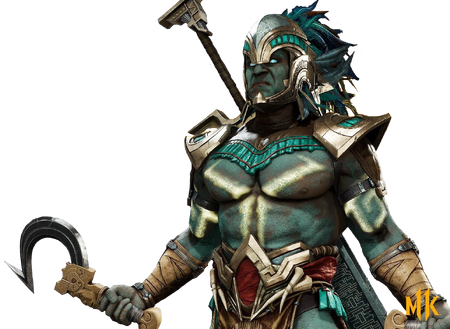 Kotal Kahn is the emperor of Outworld in the current timeline after the death of Shao Kahn. He was a young boy of the realm of Osh-Tekk that admired the emperor and was declared as a god by those that were impressed by his power in Earthrealm. As an adult, he served Shao Kahn’s heir Mileena until her true origin was revealed by Reptile, which led Kotal to overthrow her and assume the title of emperor.

Age: Thousands of years old (Has existed since the era of the Maya civilization)

Classification: Osh-Tekk, General of Shao Kahn's army (former), Kahn of Outworld, War God (Referred to as one by Mayans)

Superhuman Physical Characteristics (Has immense physical strength allowing him to crush skulls, rip off arms, completely obliterate bodies while sending heads flying sky-high with his strikes, etc.), Martial Arts (Skilled Mayan wrestler), Weapon Mastery (Wields Macana weapons), Longevity (He has lived for at least 4,000 years and hasn't aged since), Magic (Like all Osh-Tekk, he practices blood magick), Regeneration (Mid-Low), Light Manipulation (Can summon scorching sun beams), Fire Manipulation (Can imbue his weapons with fire), Weapon Creation (Can summon his weapons from thin air), Portal Creation (Wields the Portal Stone, allowing him to travel between realms), Teleportation (Can teleport in a burst of smoke and fire), Attack Reflection (Can redirect projectiles), Forcefield Creation (Can create small frontal shields), Aura (Can cover himself in fire when using his sun powers), Telekinesis (Able to restrain without physical contact), Absorption (Can absorb life force and strength from consuming blood. His own totems can passively absorb spilt blood), Damage Boost (Via totems), Healing (Able to heal himself under his own sun beams), Damage Reduction (Via totems), Creation (Able to summon three different totems), Blood Manipulation (Stated to have practiced blood magic), Energy Manipulation (Able to imbue his attacks with yellow energies), Empowerment (Gains strength during daytime), Resistance to Disease Manipulation (Unaffected from consuming contaminated blood) and Deconstruction (Took a blast from the Amulet of Shinnok)

All previous abilities enhanced, Transformation (Can turn into a massive, armored panther), Homing Attack (Can cause his sunbeams to follow targets), Earth Manipulation (Can create small, glowing fissures with his sword), Resistance to Insect Manipulation (A massive insect failed to spawn inside him after D'Vorah did her New Species fatality)

Attack Potency: Large Building level (Incapacitated Goro and killed King Gorbak with ease. Was able to cut Kintaro, who survived an earthquake followed by a nuclear blast. Can cut himself) | City level (Wounded Shao Kahn with his Macana sword and bit his hand causing him to scream in pain. Later defeated him in kombat, forcing him to escape)

Range: Standard melee range. Extended melee range with his sword. Tens of meters with magic and projectiles. Interplanetary with sunbeams.

Standard Equipment: His massive Macana sword, a Tecpatl knife, the Portal Stone, his discus and his sickles.

Intelligence: Gifted; is the current ruler of an empire and a skilled combatant. Kahn is a wise emperor who has lead Outworld back to its former glory, beings like Ermac who possess the knowledge of thousands of Edenians have said that he is a suitable ruler for Outworld.

Weaknesses: He is weakened when deprived of sunlight, and unable to call on its power. 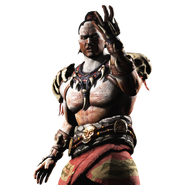 Kotal Kahn before becoming the emperor of Outworld. 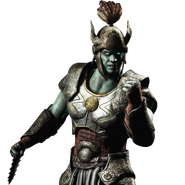 Emperor Kotal in his temporary throne.
Add a photo to this gallery

Kotal Kahn in MK11.
Add a photo to this gallery