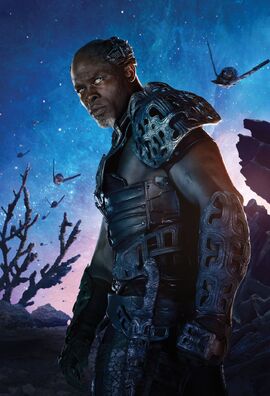 Korath the Pursuer is a Kree mercenary who worked for Ronan the Accuser to locate and retrieve the Orb under the orders of Thanos. Though Korath located the Orb on the planet of Morag, it had already been stolen by Star-Lord, who escaped with it despite Korath's efforts. When Ronan retook the Orb and betrayed Thanos, Korath remained loyal to Ronan, despite his belief that Thanos was the most powerful being in the universe. Korath was later present at the Battle of Xandar, where he would end up getting killed by Drax the Destroyer after a brutal fight.

Speed: Massively Hypersonic combat speed and reactions (Can keep up with Drax)

Intelligence: Has great combat skill and has led Sakaaran soldiers into combat

Weaknesses: If the cybernetic implant in his head is removed, he will die