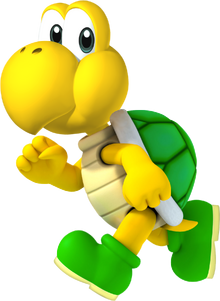 The Koopa are a group of turtle-like creatures that inhabit the Mushroom Kingdom.

Most Koopas are part of Bowser's kingdom, which has invaded Mushroom Kingdom in several occasions. But not all Koopas obey Bowser.

Powers and Abilities: Superhuman Physical Characteristics, Natural Weaponry and Defenses via their shells (They can hide in their shells for protection and use their shell to spin and shoot themselves like a pinball ball), Can sprout wings (Paratroopa only), Very high level of tech, Vehicular Mastery, Regeneration (Mid, survived being crushed flat), Underwater Breathing (Type 2), Self-Sustenance (Type 1), Limited Invulnerability in a Flashing Shell (A flashing shell is invulnerable to most of Mario's attacks in Super Mario World, the exceptions being the Spin-Jump and having Yoshi eat the shell), Resistance to Extreme Cold and Cosmic Radiations, minor Resistance to Centrifugal Force (Able to survive spinning around while trapped in their own shells with seemingly no ill side effects; note that spinning around creates a slight centrifugal force that causes dizziness. Centrifugal forces are used to simulate gravity in a closed environment.)

Attack Potency: Wall level (Their shells are capable of breaking brick blocks and walls. Should be comparable to a Goomba.)

Durability: Wall level (More durable than a Goomba unless they lose their shell); higher when withdrawing into their shells

Standard Equipment: Their shells. Usually serving as protection, they normally come in either green or red. Blue and yellow-shelled varieties are rarer and a shell-less Koopa can turn a yellow shell into a flashing shell.

Optional Equipment: Wings; like the wings of Paragoombas, it isn't confirmed as to whether a Paratroopa's wings are natural or magically-granted.

Intelligence: Varies; some can occasionally be stupid enough to walk off cliffs much like the Goombas, but some are intelligent enough to develop very advanced technology like spaceships