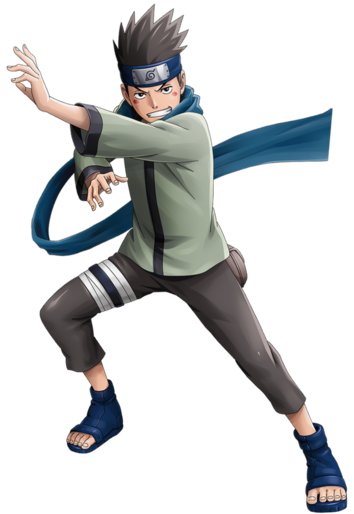 Konohamaru Sarutobi (猿飛木ノ葉丸, Sarutobi Konohamaru) is a shinobi of Konohagakure's Sarutobi Clan. After later becoming a jōnin, he becomes the leader of his own genin team. He strives to one day become Hokage after his idol, Naruto Uzumaki.

Powers and Abilities: Superhuman Physical Characteristics, Acrobatics, Master Hand-to-Hand Combatant, Weapon Mastery (Expert in the use of kunai, blade, shuriken, and other ninja weaponry, can channel energy into them to further increase their sharpness, cutting power, like as he did with his Rasengan), Chakra Manipulation, Energy Projection, Explosion Manipulation with explosive tags, Stealth Mastery, Surface Scaling, Speed Enhancement with Shunshin, Shapeshifting (Can transform into animate and inanimate objects), Duplication (Can make copies of himself), can replace himself with inanimate objects to avoid damage, Statistics Amplification (Can use chakra to augment his physical capabilities), Fire Manipulation, Wind Manipulation, Electricity Manipulation, Summoning (Can summon monkeys and frogs of varying sizes), Non-Physical Interaction (With sealing)

Attack Potency: At least City Block level (Far above Part I Naruto as he was capable of damaging one of Pain's bodies) | At least Town level (Caused enough damage to knock Full Curse Mark Jūgo out of his transformation with a Rasengan, despite having his chakra drained)

Striking Strength: At least City Block Class | At least Town Class (Matched one of Jugo's strikes directly, and hurt his unarmored body with his Blade twice)

Intelligence: Konohamaru is now a Jonin and leads a team, meaning he is a more than capable ninja and teacher.

Rasengan: A sphere of chakra energy that can create a large explosion and damage the inside of a target. Needs to be in melee range to use it. Mastered at a young age despite it being an elite technique and can now use them without chakra using the Kote. 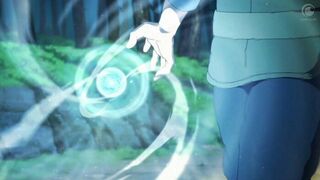 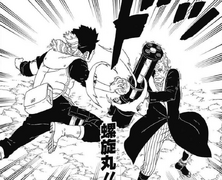 Rasengan Normal
Add a photo to this gallery

Kage Bunshin no Jutsu (Shadow Clone Technique): Konohamaru creates tangible “shadow clones” that can fight and use his techniques, but disappear after one strong hit.

Katon (Fire Release):One of the basic elemental nature transformations. It is performed by molding superheated chakra inside the stomach before releasing it via the lungs and mouth. There are also variants to this in the form of some mediums such as the use of gun powder, explosive tags, and chakra flow into a weapon. 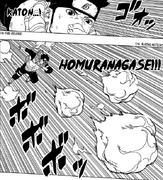