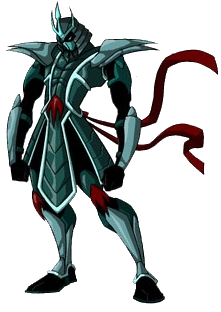 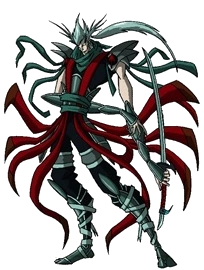 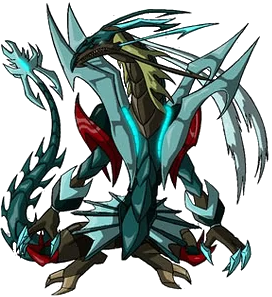 Kon-Shisho, the master of the spirits was a member of the Ninja Tribunal, a group of the strongest Ninja's in the world and was a major character in the fifth season of 4kids Teenage Mutant Ninja Turtles series. Though his ambitions were for the betterment of humanity, his personality was considered cruel by many. Willing to sacrifice the lives of people he trained for the greater good. This act of apathy deemed him as a "heartless monster" by Master Splinter

Powers and Abilities: Superhuman Physical Characteristics, Chi Manipulation, Mind Manipulation, Perception Manipulation (Manipulated the perception of the Acolytes to believe they were in a life or death battle against an unstoppable monster), Air Manipulation, Martial Arts (An utter master at Ninjutsu, so skilled that he makes masters like Master Splinter, Karai and Leonardo look pathetic), Weapon Mastery (A master swordsmen), Precognition, Transformation and Statistics Amplification (Can turn into an immensely more powerful Dragon)

Standard Equipment: A katana-like sword that doubles as a swear. His Tribunal Armor

Intelligence: Kon-Shisho is a master ninja with over 1,000 years of raw experience and training under his belt. Even in his youth, he was capable of matching the likes of Oroku Saki in combat. While his exploits are largely unknown, he was capable of utilizing the ability to become a dragon at a young age, an act that has been said to be "inconceivable". Since then, Kon-Shisho has trained in the arts of the mystical and has gained a mastery over ninja magic. This can be seen in how easily he manipulated the perception and minds of every Acolyte at once.

Retrieved from "https://vsbattles.fandom.com/wiki/Kon-Shisho?oldid=4117094"
Community content is available under CC-BY-SA unless otherwise noted.