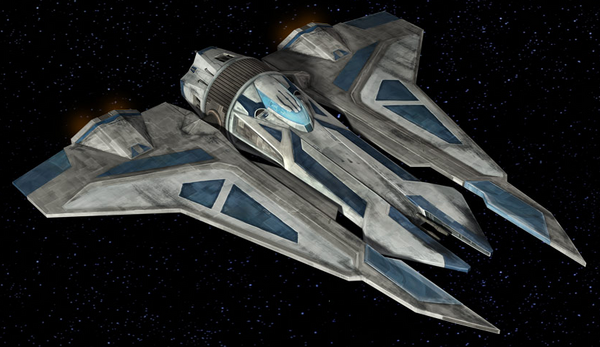 The Kom’rk-class fighter, also known as the Gauntlet fighter, was a kind of troop transport starfighter used by the Pre Vizsla led Death Watch and later by the Darth Maul led Shadow Collective during the Clone Wars. Built to quickly deliver up to two dozen troops into battle, it was also swift and agile enough to take on the role of a starfighter and, in the right hands, could go toe to toe with the Republic Navy’s Z-95 Headhunter and even the Imperial Navy’s TIE fighter. Its wings were special in that like the wings of the Fang Fighter, they could rotate around the main fuselage and improved maneuverability in dogfights. When the craft was landed, they would swing upwards and stay upright.

Needed prerequisite for use: At least 1 trained pilot

Attack Potency: Town level+ with its laser cannons (Capable of destroying other Gauntlet fighters with a single burst)

Speed: Subconic+ to Transonic atmospheric speed (Never specified but likely in the range of 900 to 1,200 km/hr as is typical for any craft considered a starfighter). Can accelerate continuously to Sub-Relativistic+ speeds in space (More than capable of matching the standard imperial TIE and other small starfighters). Massively FTL+ travel via hyperspace (Likely equipped with the very same class of hyperdrive as the Fang Fighter, which is a Class 2. Should thus be this fast)

Durability: Town level+ (Should be a tad more durable than something like a Maxillipede shuttle. This is proven by the fact that impacts such as this cause only minor damage)

Weaknesses: Lack of deflector shielding leaves it far more vulnerable compared to other craft of similar size (such as armed light freighters)

Retrieved from "https://vsbattles.fandom.com/wiki/Kom%27rk-class_Fighter?oldid=6371866"
Community content is available under CC-BY-SA unless otherwise noted.