VS Battles Wiki
Register
Don't have an account?
Sign In
Advertisement
in: Real World, Weapons, Guns,
and 2 more 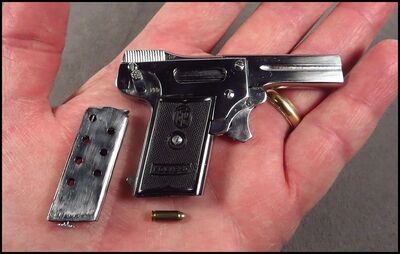 The Kolibri (German for "hummingbird") is the world's smallest and weakest production firearm, which fires the 2mm Kolibri (also known as the 2.7mm Kolibri Car Pistol or 2.7×9mm Kolibri), the smallest commercially available centerfire cartridge. It was designed and sold by an Austrian watchmaker by the name of Franz Pfannl, who marketed them as "ladies' self-defense weapons". About a thousand of these tiny pistols were made between about 1910 and the beginning of World War I in 1914, when production had to stop as the economy turned to a war footing.

Powers and abilities: Fires tiny projectiles which have questionable application for self-defense.

Attack Potency: Below Average Human level (Average muzzle energy of a measly 4 joules, capable of penetrating only 10–40 millimeters of pine board; .177 caliber (4.5mm) 7.5 grain (0.486 g) pellets fired at 450 ft/s (137 m/s) from an air rifle have a higher muzzle energy (4.57 joules); even an average untrained human's casual punch has more energy than this)

Range: Effective range of a dozen meters at most

Weaknesses: Arguably too weak to kill anything larger than a mouse at point blank range, lacks a rifled barrel so the accuracy is terrible beyond point-blank range, tiny size makes handling the gun and cartridges difficult.