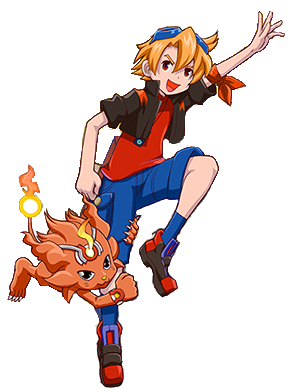 Gender: Male, his Digimon are gender ambiguous however

Can use healing items, Non-Physical Interaction, Enhanced Senses, Resistance to Mind Manipulation and Information Manipulation (Can resist the effects of Grimmon's Chrono DSR).

Attack Potency: Human level | Large Building level+ (Defeated a Raremon, who is far weaker than normal Champion Digimon. To the point that his offensive power is labelled as nonexistent. Commands 3 well trained Rookie Digimon) | At least Island level (Commands 3 well trained Champion Digimon) | At least Large Star level, possibly Multi-Solar System level (At this point Koh has a team full of extremely powerful Ultimates who are close to becoming Megas. Can easily dispatch other Ultimate level Digimon and thus should be far superior to Digitamamon) | Galaxy level (At this point should have multiple Mega Digimon. Due to these Digimon being very well trained, his Mega levels can easily fodderize the average Mega Digimon as by this point Mega Digimon begin to appear as random encounters) | Low Complex Multiverse level (Defeated ChaosGallantmon and ExoGrimmon. Fought and defeated GAIA Origin members such as Susanoomon and ZeedMillenniummon in a straight battle) | At least Low Complex Multiverse level, possibly Complex Multiverse level (Fought and defeated Chronomon and later on commands it in combat)

Speed: Normal Human with FTL to Immeasurable reactions (Can react to Ultimate level Digimon as well as End game Digimon) | At least Massively Hypersonic+ (Commands 3 well trained Rookie Digimon) | At least Massively Hypersonic+ with Relativistic reaction/combat speed (Equal to other Champion level Digimon who scale to this calc) | Relativistic+ with FTL reaction/combat speed (Superior to the average Ultimate level Digimon as well as Digimon such as Rapidmon) | FTL (Utilizes extrememly well trained Mega Digimon. His Digimon should be far faster than the likes of Rapidmon and Rinkmon. Two Digimon who can move extremely close to the speed of light) | Immeasurable (Kept pace and defeated ExoGrimmon) | Immeasurable

Stamina: Very High, was able to keep up very long and dragged out battles against Grimmon, ChaosGallantmon, and Gaia-Origin

Standard Equipment: His Digivice. Angemon caries a staff called "Angel Rod", RizeGreymon comes equipped with the "Trident Revolver", and ShineGreymon BM has a sword and shield made of Solar Flames, Various healing items and restoratives to assist his partners in combat.

Intelligence: Koh is a fantastic tactician whose lead his Digimon through many battles against extremely powerful Digimon and has become one of the greatest Union Tamers, surpassing both Chief Julia and Chief Glare and defeating Grimmon to save the Digital World.

Weaknesses: Koh himself is a normal human and comes with all the weaknesses of one, and thus makes an easy target. As a result, his Digimon will often be forced to take attacks for him in order to protect him, making him a liability should the enemy be aware of this. Regardless, this is somewhat lessened by the fact that his willpower is strong enough to resist mental attacks (such as those of Grimmon) along with the fact that he carries a multitude of healing items to keep his Digimon in top form.

Strike of the Seven Stars: Creates seven superheated balls of light at the opponent to annihilate them.

Note: The attacks, abilities, powers etc only apply to his Digimon, not himself. Links to their official profiles can be found by clicking the pictures below. 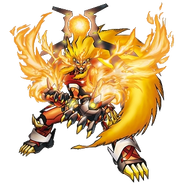 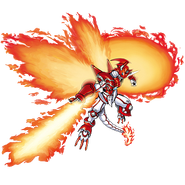 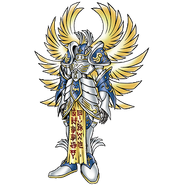 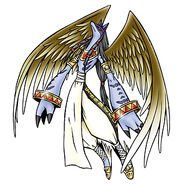 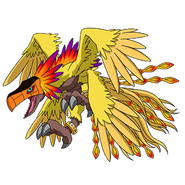 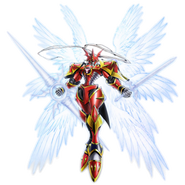 Gallantmon Crimson Mode
Add a photo to this gallery