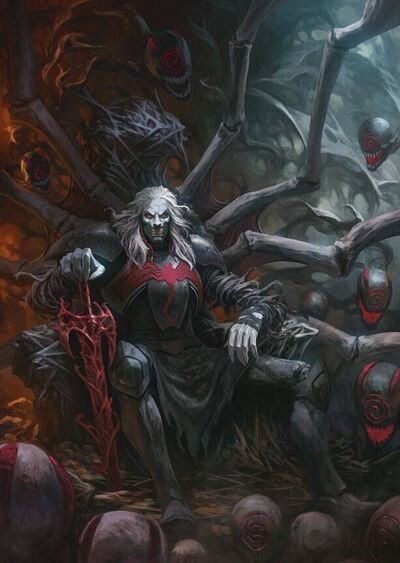 Knull, the God of the Symbiotes, is an ancient malevolent deity who was responsible for the creation of the Symbiote race. He seeks to expand the darkness all across the universe by conquering, destroying and corrupting every life form he comes across.

Age: Older than the Universe

Powers and Abilities: Superhuman Physical Characteristics, Immortality (Type 1), Regeneration (Mid, Regenerated from being Stabbed through the skull), Self-Sustenance (Types 1, 2, and 3), Flight, Spaceflight, Shapeshifting (Both Knull and All-Black are capable of freely shapeshifting, All-Black is able to shapeshift to create clothes, armor, wings, weapons, chains, and tendrils), Creation, Weapon Creation (Able to create weapons out of his Living Abyss. All-Black can be used to create numerous weapons including swords, scimitars, maces, knives, flails, whips, and hammers.), Weapon Mastery (Skilled swordsman), Martial Arts (Skilled in hand to hand combat), Water Walking, Darkness Manipulation (Created All-Black the Necrosword from his shadow, as well as a suit of symbiote-armor. Created an army of Symbiotes from his shadow. Should have control over shadows vastly superior to Gorr, who can completely merge with shadows, as well as create and manipulate pure darkness to conceal himself.), Possession (Able to use Symbiotes to take control of lesser beings), Mind Manipulation (Able to mentally dominate Symbiotes and drive them into bloodlust with his presence, Potentially burned the humanity from the Venom Symbiote), Memory Manipulation (Forced his memories onto Eddie Brock), Avatar Creation, Soul Manipulation (His Living Abyss has properties similar to the Exolon, entities made of his Living Abyss that can consume souls, removing the target's sense of time and sentience), Power Nullification (Able to nullify immortality with All-Black), Energy Projection, Life Manipulation (Able to create sentient minions such as Black Berserkers as well as artificial constructs of other people), Clairvoyance (Able to see and feel through Black Berserkers and Symbiotes merged with his essence), Absorption (All-Black is able to absorb and assimilate things such as stars and black holes, as well as the blood of gods it or its constructs kills to strengthen itself and its host), Biological Manipulation (Those cut by All-Black will be gradually infected by it, destroying them from the inside), Likely Resistance to Heat Manipulation (Should have a resistance comparable to Gorr who was unfazed by being tackled into the sun)

Attack Potency: Multiverse level+ (Decapitated a Celestial and used its energy to empower All Black the Necrosword)

Speed: Massively FTL+ (Blitzed a Celestial, and should be comparable to Gorr The God Butcher, who is able to keep up with Thor)

Lifting Strength: Class Y (Should be at least as strong as if not stronger than Gorr)

Range: Intergalactic (Able to control Symbiotes from across galaxies)

Intelligence: Gifted (Despite not possessing any formal training, Knull is a vicious warrior with billions of years' worth of combat experience, capable of slaughtering entire armies of gods singlehandedly)