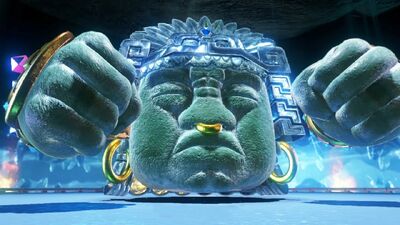 Knucklotec is the second boss of the Sand Kingdom in Super Mario Odyssey. He is based off of the real-world Olmec heads, and has several similarities to Eyerok from Super Mario 64, due to both being ancient stone guardians found underground in deserts, having giant floating hands, and speaking in broken grammar.

He can be first found in the desert, with the top part of his head sticking out from the ground. Mario can walk on top of him in this state and Ground Pound him, where he will twitch and sometimes make a growling sound.

He is encountered when Mario enters the sand flow directly beneath the Inverted Pyramid. When he appears, he is distraught over the loss of the kingdom's Binding Band, and presumes Mario to have stolen it. Along with Bowser's icy water attack, he is the cause of the ice in the Sand Kingdom, and when he is defeated all the ice melts away.

In battle, Knucklotec slams his fists into the ground; if one of his fists hits a sheet of ice on the ground, he briefly writhes in pain. Mario must then capture one of the fists and use it to knock out Knucklotec while avoiding the ice shards he fires from his other fist. After being hit once, he will slide his fists across the battlefield one time; the fists travel parallel to each other. He will then slam his hands on the ground, causing icicles to fall down and bury halfway onto the ground. Mario must then repeat the process once more. During the third phase, his fist-slide attack is slightly faster, and he has an additional attack where his hands lock onto Mario before clapping together multiple times. After being defeated, Knucklotec will explode, releasing the Sand Kingdom's second Multi Moon.

In the rematch battle in Peach's Castle, Knucklotec's attacks create hordes of Chinchos; at the start of the battle and after he does his fist-sliding attack, fist-smashing attack or his fist-clapping attack. Hordes of Chinchos also appear when the ice crystals fall after a hit is scored on the boss.

Speed: Massively FTL+ (Capable of reacting to and keeping up with Mario)

Durability: Large Star level (Tanked hits of his own fists.)

Weaknesses: Hurt by his own fists and ice if he slams down on it.

Retrieved from "https://vsbattles.fandom.com/wiki/Knucklotec?oldid=4117014"
Community content is available under CC-BY-SA unless otherwise noted.