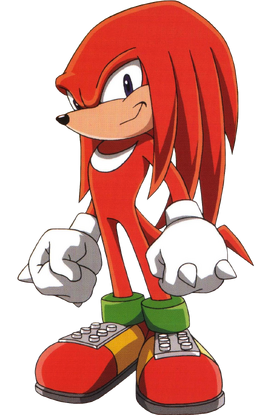 Knuckles the Echidna (ナックルズ・ザ・エキドゥナ Nakkurusu za Ekiduna) is one of the main characters in the anime series Sonic X and its comic series published by Archie Comics. He is an anthropomorphic echidna, famous as a treasure hunter and a master of martial arts.

Speed: Massively Hypersonic+ (Slower than Sonic and Shadow but has kept pace with them in combat, as well as dodging the latter's Chaos Spears. Can outpace automatic gunfire and explosions with ease)

Striking Strength: Island Class (Can damage Sonic and Shadow with his strikes)

Durability: At least Island level (Was completely unhurt by the previously mentioned explosion. Has withstood beatings from those far stronger than himself)

Intelligence: Being a master martial artist, Knuckles is an excellent combatant with years of experience fighting against powerful and diverse opponents. He has shown to be able to fight the likes of Sonic and Rouge to a standstill, and single-handedly defeat a Metarex commander.

Weaknesses: Knuckles has a short temper and is somewhat naive (has been tricked by Dr. Eggman several times).

Start a Discussion Discussions about Knuckles the Echidna (Sonic X)