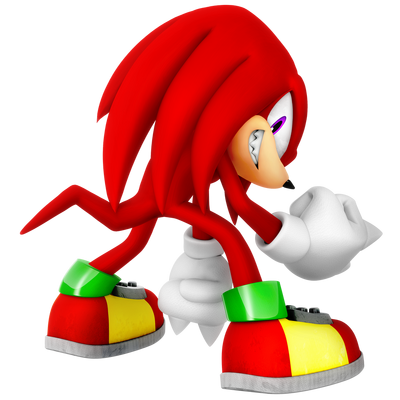 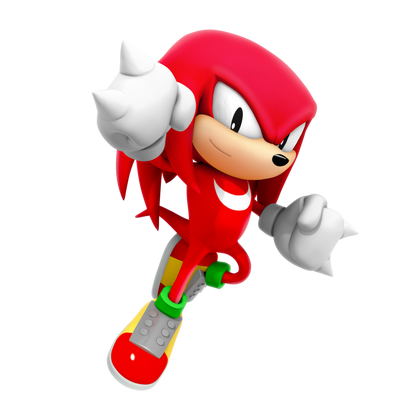 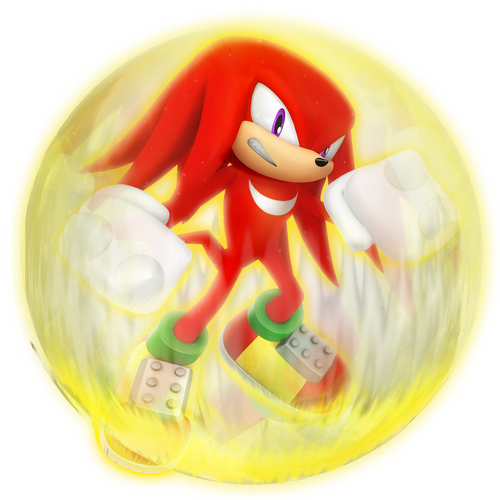 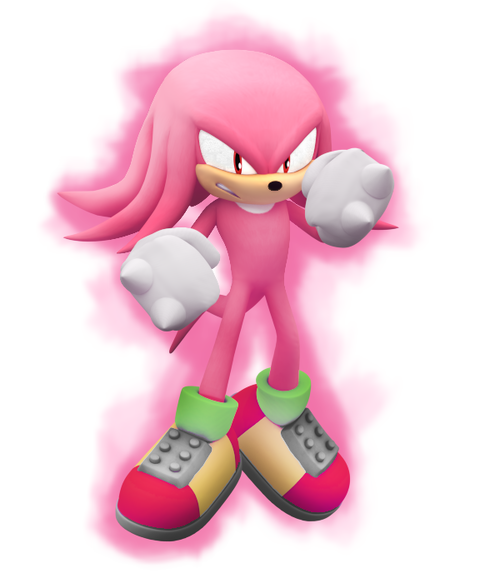 Knuckles the Echidna is a fictional character from the Sonic the Hedgehog series. He is an anthropomorphic echidna and the current guardian of the Master Emerald, a powerful ancient relic that is his solemn duty to protect from anyone seeking to abuse it. He is also the sole remaining descendant of the Knuckles Clan and the last of the echidnas on earth. His dominant traits are his super strength, and the two spike-like knuckles on each of his hands, from which his name is derived from, which he can use to dig with and climb walls. He can also trap the wind under his dreadlocks to glide through the air.

A loner by nature, Knuckles is independent, headstrong and serious, yet gullible and short-tempered to a fault. He is entirely devoted to his duty, spending most of his time on Angel Island protecting the Master Emerald, and rarely cares for anything that is of no importance. When his friends and others need his help, however, Knuckles can always be relied on being willing to leave his post and prove himself a faithful and good-hearted hero. He is also one of Sonic's oldest friends and rivals.

Classification: Anthropomorphic Echidna, Guardian of the Master Emerald, Leader of the Resistance

Superhuman Physical Characteristics, Martial Arts, Self-Sustenance (Type 1), Hammerspace, Forcefield Creation (Of the fire and electricity varieties), Statistics Amplification (Can enhance his movement speed with Speed Shoes), Size Manipulation via Grow and Shrink, Invulnerability (With the Invincibility Monitor), Can sense the Master Emerald whether it was broken or not, Chaos Emeralds, and even Sol Emeralds, Can use the Master Emerald and control its powers, Can glide through the air and dig through the ground, Surface Scaling, Resistance to Extreme Cold, Cosmic Radiations (Unaffected by the environment of space), Poisons and Chemical Products (Can travel through the most dangerous areas of Chemical Plant Zone without any trouble)

Gravity Manipulation and Black Hole Creation (With the Gravity Band), Purification (Type 3 with Cure All Spray) Statistics Amplification (With Golden Gloves and Speed Bar), Healing (With Health Seeds, Health Roots, Health Leaves, and Antidotes), Elemental Manipulation (Of Water, Electricity, Ice, Wind, and Earth varieties via elemental Rings), Fear Inducement (With the Spooky Charm), Resurrection (With Angel Amulet and Ring of Life), Life-Force Absorption, (With Nocturne Blade), Statistics Amplification (With Cheezlet and Blayze, attacks do much more damage), Damage Reduction (With Velk and Gibber, damage from attacks are greatly reduced), Healing (With Stebsly and Joy, vitality is regenerated over the course of a fight), Resurrection (With Ovus, their partner is automatically brought back up to three times in one battle), Probability Manipulation (With Koolet, Belgog, Fimbley, and Stugs, enemy attacks have a greater chance of missing. Churdle and Oldarg give a higher chance of hitting the opponent. Keroyo increases the chance of an enemy fleeing. Spartoi grants a chance to instantly knock out the opponent with every attack done), Shield Creation (Can make passive shields of fire, water, wind, lightning, and earth that stay even after being hit), Elemental Manipulation (Can imbue his attacks with fire, water, wind, w:c:sonic:Zimbalightning, earth, and ice), and Damage Transferal (With Pooki, damage taken is split between teammates). With the Color Powers: Transformation, Fire Manipulation and Explosion Manipulation (With Red Burst and Black Bomb), Vibration Manipulation (With Blue Cube and Gray Quake), Energy Projection (With Cyan Laser and Crimson Eagle), Electricity Manipulation (With Ivory Lightning), Invisibility (With Jade Ghost), Transmutation, Deconstruction, Black Hole Creation, Gravity Manipulation, Size Manipulation, and Absorption (With Indigo Asteroid, Violet Void, and Purple Frenzy), Intangibility (With Violet Void and Jade Ghost), Flight and Levitation (With Crimson Eagle, Green Hover, Indigo Asteroid, Magenta Rhythm, Orange Rocket, and Violet Void), Void Manipulation (With Violet Void). With Forcejewels: BFR, Barrier Creation (Can create barriers for a limited amount of time that others can't pass), Teleportation (Can teleport others to himself, teleport himself to others, swap places with an opponent, or teleport himself or others to a random location), Body Puppetry (Can force an opponent to move or use their items). With various Power-Ups: Homing Attack with Mines, Fire Manipulation with Fire, Ice Manipulation with Ice, Electricity Manipulation and Paralysis Inducement with Lightning, Perception Manipulation with Illusion, and Limited Magnetism Manipulation with Magnet. Resistance to Status Effect Inducement (With the Immunity Idol)

All abilities of Super knuckles on a greatly enhanced scale, Afterimage Creation (Enhanced from before, as he now has multiple constant afterimages that follow him), Shockwave Generation (With the Gliding Shockwave Attack, Hyper Knuckles causes devastating tremors that damage all enemies in his vicinity)

Speed: Sub-Relativistic+ | Likely FTL (Can keep up with Sonic's casual run, he should be comparable to Tails speed movement speed wise) with FTL reactions and combat speed (Can react to and keep up with even Sonic's attacks, though he lacks the quickness Sonic has. Sonic has said in Sonic Battle that Knuckles is "easily read", the Maximum Heat Knuckles attack is like the Light Speed Attack made by Sonic) | FTL | Massively FTL+ (Far swifter compared to his base form) | Massively FTL+ (Far faster than Super Knuckles)

Stamina: Very high, among the highest on Sonic's team. Limitless as Super and Hyper Knuckles.

Intelligence: Above Average (Seems to have extensive knowledge of ancient civilizations, as he was able to translate an ancient language in the Gigan Rocks, skilled combatant as he is a martial arts master as he fought multiple armies of the Nocturnus Clan, and he's an amazing treasure hunter)

Weaknesses: His attacks are readable as stated by Sonic and a little naive (trusts individuals like Eggman despite him tricking him many times) | None notable | None notable

1. Classic Super Knuckles may be non-canon or dubiously canon.

2. As long as the Super Emeralds are active, Hyper Form can be accessed anywhere even without having them in person. 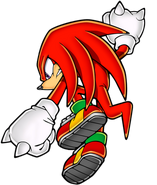 Adventure Knuckles
Add a photo to this gallery

Four (Battle for Dream Island) Four’s Profile (Speed was equalized, both were 5-A, and both had all of their equipment)

Tails (Sonic the Hedgehog (The Universe)) Tails' Profile (Both were in their Low 2-C Super forms, battle took place in Hidden Palace Zone and speed was equalized)

Start a Discussion Discussions about Knuckles the Echidna (Game Character)