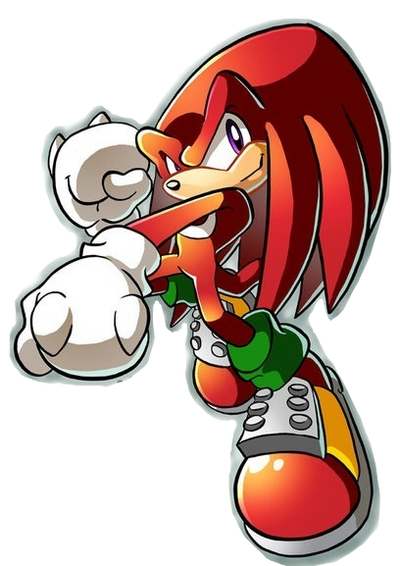 Knuckles the Echidna is a character that appears in the Sonic the Hedgehog comic series and its spin-offs published by Archie Comics. He is the last mobian echidna known to inhabit Sonic's World and the Guardian of both Angel Island and the Master Emerald. While his primary concern is protecting his home from invaders, certain threats, particularly those posed by Dr. Eggman, have been enough to persuade him to leave the island.

Attack Potency: Multi-Continent level+ (Fought with Sonic the Hedgehog on equal footing. Matched and pummeled Shadow in an extensive fight. Defeated Amy Rose with one good hit. Could dent Proto Man's shield and defeat him with one powerful strike), Moon level with Chaos Energy (Barged straight through Walter Naugus' crystal, which previously incapacitated himself, Shadow, Amy, Rouge, and Omega all at once)

Speed: FTL (Matched pace with Sonic and Shadow. Has reacted to and evaded laser fire), higher with Chaos Energy

Stamina: Very high (Can fight for days straight and take large amounts of punishment without showing signs of fatigue).

Intelligence: Being the guardian of the Master Emerald, Knuckles is an incredibly skilled fighter. He possesses mastery in a number of martial arts, and is capable of fighting the likes of Sonic and Shadow to a standstill. Further testaments to his combat prowess includes regularly decimating battalions of Badniks (killer robots), taking down hordes of military-trained soldiers, outfighting Gizoids, and Dr. Eggman himself. Additionally, Knuckles possesses extensive knowledge on the various aspects of his world, and can quickly adapt to foreign environments.