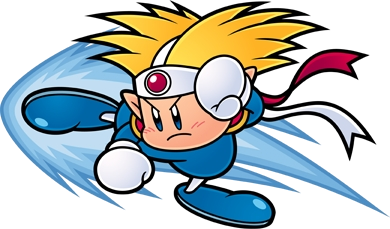 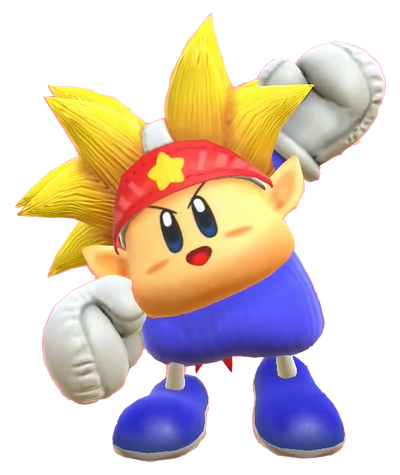 Knuckle Joe is a resident of Dream Land that grants Kirby the Fighter ability when swallowed.

Classification: Denizen of planet Pop Star (Some of them), Minor enemy, The Contender, Helper, Star Ally

Superhuman Physical Characteristics, Non-Physical Interaction (Can affect Void Soul), Self-Sustenance (Type 1), Toon Force, Regeneration (Mid. Like all Star Allies, he can quickly recover from being crushed flat, as well as having no notable damage after fighting Flamberge, who can impale and trap many foes at once like a shish-kebab using a sword covered in fire, before tossing them as projectiles surrounded by fire), Immortality (Type 3), Vehicular Mastery, Martial Arts, Energy Manipulation & Projection (Utilizes energy to increase the range of his attacks. Able to shoot raw energy), Fire Manipulation, Pseudo-Flight, Can turn into a small ball of intangible energy, Magic, Resurrection (Able to revive others via Revival Spell), Empathic Manipulation & Morality Manipulation via Friend Hearts (Can turn enemies into allies. Able to overwrite Void Termina's effects on allies; Scales to his multi-galactic potency), Healing & Purification (Friend Hearts can be used to heal and purify others. Can "Revive" defeated allies, who are merely unconscious), Cloth Manipulation, Power Bestowal (Turning targets into allies gives them that same power), Creation (Able to help other Star Allies create Friend Stars and the Star Allies Sparkler), Resistance to Morality Manipulation & Empathic Manipulation (Unaffected by the presence of the individual Dark Hearts), Transmutation (Like all Star Allies, they aren't transmuted after being cooked inside Chef Kawasaki and Cook Kirby's pot, process that regularly turns foes and items into food), heat and cold (Unaffected by the temperatures of Blizzno Moon and Star Lavadom), Black Holes (Able to outrun and withstand black holes from Marx, although doing so is an outlier in terms of durability)

Attack Potency: Large Planet level (Able to participate in the Megaton Punch, in which the weakest competitor can put a sizable crack in a planet that's visible from space. As Helpers, Knuckle Joes can beat stronger enemies than themselves, as such they should be stronger than Schwarzs, a minor enemy that can create black holes), able to negate durability with Friend Hearts, at least Multi-Solar System level via summons

Speed: FTL (His shockwaves can travel at these speeds, and he should be able to keep up with characters who can react to them. Can react to Laser Ball's lasers which are outright called Light Amplification by Stimulated Emission of Radiation)

Lifting Strength: Unknown (Official art suggests that he is above other Helpers)

When collected, Knuckle Joe becomes invincible for a short time, and almost any enemy he touches will be instantly defeated, or at least damaged.

When collected, Knuckle Joe becomes invincible for a short time, and almost any enemy he touches will be instantly defeated, or at least damaged.

The Final Weapon in Star Allies, used to take out Void Termina. The Star Allies Sparkler fires projectiles from the tip, fly around quickly and efficiently, and spin counterclockwise to avoid all damage on a relative scale (Sparkler Turn). Kirby canonically took the lead in the center of the Sparkler while his friends rode in the tail. Still, the leader can be rotated to imbue the shots with a different element depending on the leader (the technique is called Rider Switch). The Sparkler can fire different homing projectiles with varying power depending on charge time. An uncharged shot is called the Sparkler Comet, and it fires a star shaped projectile. A charged shot is called the Sparkler Starshot, and it fires a projectile shaped like two intertwining stars. The strongest attack is called Team Star Allies!, which, if everyone who's riding charges together and releases at the same time, fires a giant laser at the opponent. Knuckle Joe uses this item on his own when used in The Ultimate Choice of Star Allies.

The European version of Knuckle Joe's trophy in Super Smash Bros. for Wii U, much closer to the original one where it's said that he's "a fighter who makes full use of all martial arts" (あらゆる格闘技を駆使する格闘家とし)
Add a photo to this gallery