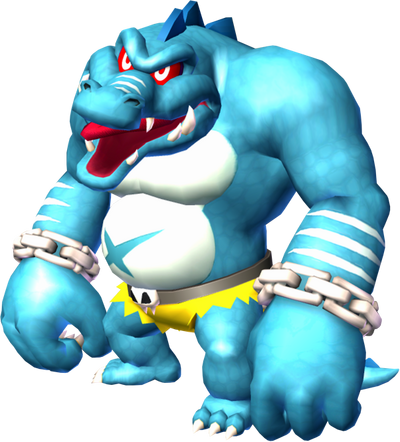 Kludge is a fictional character in the Donkey Kong series of video games, making his sole appearance in Donkey Kong: Barrel Blast for the Wii. He is a muscular Kremling who has a rivalry with Funky Kong, sharing his stats in Barrel Blast. He acts childish and is good friends with Kip and Kass because of it, according to his Super Smash Bros Brawl trophy.

Attack Potency: Small Country level (Can punch Donkey Kong and other characters of equal power hard enough to stun them)

Durability: Small Country level (Can shake off punches from Donkey Kong and other characters of equal power)

Retrieved from "https://vsbattles.fandom.com/wiki/Kludge?oldid=4829398"
Community content is available under CC-BY-SA unless otherwise noted.