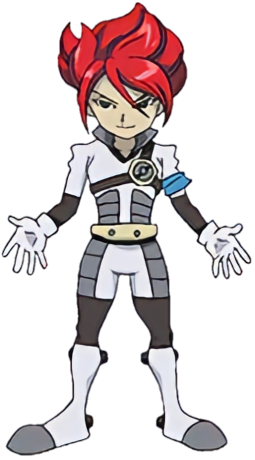 Kiyama Hiroto, or Xavier Foster in the English Dub, is a supporting character in Inazuma Eleven, who made his debut in the 2nd season/game. He was a member of Aliea Academy, and the captain of one of their three master ranked teams named Gaia, which eventually was given the title of The Genesis. He was the team's Forward, as well as the main antagonist to Endou during the second game/season, named by his alter ego 'Gran' (or Xene).

Tatsuya grew up in Ohisama En orphanage with the rest of the children in Aliea Academy, who was sought out and used by Kira Seijirou to prove the power of his 'superhumans', by demonstrating their power through the use of Soccer. Tatsuya, in particular, was Seijirou's personal favorite, due to his striking resemblance and soccer passion to his deceased son Kira Hiroto, which was why he had changed Tatsuya's name to Kira, and personally adopted him. After the Aliea Academy scandal had been exposed, and Seijirou arrested, Kiyama forgave his 'father' for what he had done and promised to keep in touch along with his stepsister, Kira Hitomiko. It was revealed that Hiroto was one of the Aliea children who didn't require his immense power from the Aliea Rock.

During the 3rd game/season, Kiyama was scouted out by Hibiki as a candidate for joining Inazuma Japan, to compete in the world FFI championships as Japan's representative. Kiyama was successfully chosen, and acted as a midfielder and forward for the team, putting all of his involvement with Aliea behind him and finally being able to enjoy Soccer as a game.

Classification: Forward, Midfielder, No.11 & Captain of Gaia/The Genesis, No.18 of Inazuma Japan

Attack Potency: At least Large Town level (Was Captain of Aliea Academy's strongest chosen team Genesis, and was initially able to stomp Raimon easily, who were all better than Frontier Arc Afuro Terumi, Should be comparable, if not stronger than, Nagumo Haruya and Suzuno Fuusuke, His shots are described in the games to be 'like meteors', Easily stopped both Afuro and Ignite/Frozen Steal with a kicked soccer ball), most likely much higher (His Ryuusei Blade is described in the games to have equal power to the Big Bang, though this is likely Hyperbole) | At least Large Town level (Comparable to other Inazuma Japan players, as well as having strong Forward capabilties in the team, Provides 1/3 of the power for Big Bang and Grand Fire, and 1/2 for The Birth), City level with strongest hissatsu (His Tenkuu Otoshi technique was able to break through Rococo Ururpa's God Hand X technique, which could stop his Ryuusei Blade V3 shot)

Speed: At least Hypersonic+ (Was easily able to blitz Raimon and should be superior in speed to Gemini Storm and Epsilon) | At least Massively Hypersonic (Able to compete with World level teams such as The Kingdom and Little Gigant, and should be faster than Dark Emperor Kazemaru, who dodged a lightning bolt from The Tower)

Lifting Strength: Superhuman (Able to easily lift and use the Aliea ball as if it were a regular soccer ball)

Durability: At least Large Town level (Was able to hold back The Earth with Yagami for a short while, Took a bloodlusted shot directly from Yagami Reina, though was injured, Can survive the counterforce of his moves) | At least City level (Can withstand his Tenkuu Otoshi, Withstood multiple Fake Bombers)

Intelligence: Most likely High (As captain of Genesis, should be fairly skilled in tactical ability, as well as the 4th substitute for the captain of Inazuma Japan. Extremely technical and precise in his soccer as well)

Weaknesses: Prohibiting his limiters in his Aliea Form will increase his power, but his body takes a hard toll.

Mind Manipulation: Within his time at Aliea Academy, it was shown in the games that Kiyama could manipulate others mentally, specifically by using mind wipe as he did on Gemini Storm, or mind control, though he uses this passively.

Reactive Power level: Like many of the Inazuma Japan characters, Kiyama is capable of drastically improving his power, techniques, and shots during tough battles, such as being able to improve Ryuusei Blade within matches. Additionally, his team, Genesis, was able to easily perfect their strongest move on the first try, most notably being able to create Tenkuu Otoshi to break through Rococo's God Hand X.