Kiyama Harumi is a scientist especializing in AIM Diffusion Fields who used to work for Kihara Gensei. She was ordered to become the teacher of a class of Child Errors (Orphans dropped in Academy City) for the sake of an experiment regarding out-of-control esper abilities. Despite her reluctance and initial dislike of the idea of leaving her experiments aside to work with children, she eventually bonded with her students and grew to like her role as their teacher. However, the day of the experiment came, and all of her students fell into a coma when things went awry.

Despite Harumi's best efforts to try to help the children through legal means, having attempted to get permission to use the Tree Diagram supercomputer 23 times to try and find a cure, she was unable to get any help, and Academy City quickly swept the incident under the rug. Faced with this Harumi decided to take matter into her own hands and created the Level Upper, a sound which leveled up esper's abilities by synchronizing the user to a brainwave network, but was actually a means for Harumi to create her own organic supercomputer by linking up thousands of esper brains together, with the side effect of giving her, the controller of the network, access to all the esper powers in it.

Upon being discovered as the creator of the Level Upper, Harumi was forced to battle Anti-Skill and the #3 Level 5, Misaka Mikoto, who eventually defeated her. However, her defeat made the network go out of control and created the AIM Burst. After being stopped from committing suicide by Uiharu, Harumi was taken to custody by Anti-Skill.

Tier: 10-B physically, 9-C with handgun, at least 9-B with various esper powers, 8-B with vaporizing beam

Stamina: At least above average, she managed to wipe out an Anti-Skill squad and fight Misaka Mikoto for a while by using multiple esper powers without getting tired

Intelligence: Very high, is an Academy City scientist that managed to achieve something previously considered impossible by the scientific community, a person using more than a single esper power, through the creation of Level Upper 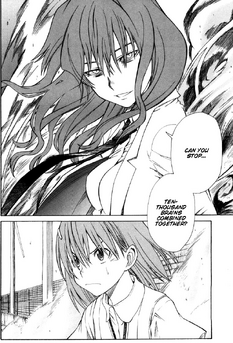 Retrieved from "https://vsbattles.fandom.com/wiki/Kiyama_Harumi?oldid=5296500"
Community content is available under CC-BY-SA unless otherwise noted.