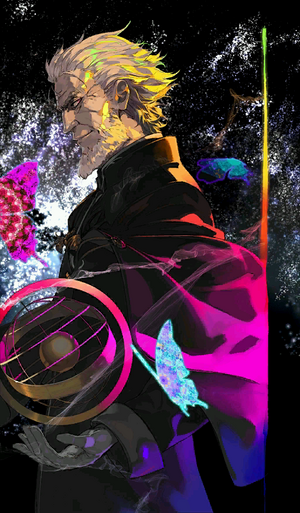 Kischur Zelretch Schweinorg, also known as Kaleidoscope and Wizard Marshal Zelretch among many nicknames, is one of the few Magicians in the world, and the enigmatic user of the Second Magic, Kaleidoscope, allowing for the operation of parallel worlds. He holds the high rank of Wizard Marshal in the Mage's Association. In the past, he fought and defeated Crimson Moon using the Second Magic, but he burnt himself out in the process, becoming much weaker, and Crimson Moon turned him into a vampire. Now, as the Fourth of the Twenty-Seven Dead Apostle Ancestors, he travels across parallel worlds while defending the countless possible futures.

Tier: At least 5-B, possibly 2-A | High 6-C. Higher with Jeweled Sword Zelretch

Powers and Abilities: Superhuman Physical Characteristics, Enhanced Senses (Dead Apostles' senses eclipses that of humans, being capable of detecting alcohol in blood by taste and having a sense of smell that humans can't deceive), Magic, Forcefield Creation, Elemental Manipulation, Curse Manipulation, Hypnosis, Dimensional Travel (Can travel across infinite parallel worlds), Energy Manipulation, Energy Absorption and Projection with Jeweled Sword Zelretch (Can absorb magical energy from the air, across infinite parallel worlds to utilize an endless pool of magical energy, and can use said energy to create beams of light. It is also considered to be a Conceptual Weapon), Clairvoyance, Pocket Reality Manipulation, Time Travel, Reality Warping, Time Manipulation and Spatial Manipulation with the Second Magic (Can observe parallel worlds to see their events and possible outcomes. Can revise records and rewrite the World and events, can create spatial distortions), Immunity to Conventional Weapons (His high levels of Mystery as one of the strongest Dead Apostle Ancestors renders him immune to modern weapons that lack a supernatural component, such as bombs and guns), Resistance to Magic (All magi and Dead Apostle Ancestors have some degree of resistance to magical effects), Immortality (Types 1, 3, and 7), Regeneration (Works by reversing time. Mid normally, High-Mid; under the full moon via scaling to Roa), Can exist as a disembodied soul.

Attack Potency: At least Planet level, possibly Multiverse level+ (Stopped Crimson Moon's Moon Drop and defeated him in single combat, though it weakened him considerably and he only won because Crimson Moon did not understand Magic). | Large Island level (Even in his weakened state, he is one of the strongest Dead Apostle Ancestors and should at least be comparable to the others in the upper echelon such as Gransurg Blackmore). Higher with Jeweled Sword Zelretch (The true Jeweled Sword Zelretch is much stronger than Rin's flawed replica, which emits a light comparable to Excalibur).

Stamina: Very high. Can draw upon magical energy from endless parallel worlds, giving him an effectively unlimited pool of energy.

Intelligence: Extraordinary Genius. As the Wizard Marshal famed as the pinnacle of magi and one of the only people able to use True Magic, he is an extraordinarily powerful and gifted Magus, creating Mystic Codes that are so complex that even with all of Archer's knowledge, Shirou couldn't comprehend or analyze it, comparing it to alien technology. He believed that it'd only be possible to replicate his Jeweled Sword generations from now. In addition, his attempts to teach others his magecraft usually ends as a disaster for them, as they usually become crippled or traumatized, further emphasizing the complexity of his magecraft. In combat, Zelretch uses the Second Magic and his own magecraft to devastating effect, defeating the King of Vampires, Crimson Moon in single combat and pushing back a mirror image of the moon.

The Second Magic: The second true magic to be discovered, also known as "Zelretch" and "Kaleidoscope", in honor of its discoverer. The Second Magic revolves around the "operation of parallel worlds", allowing him to do anything ranging from traveling through them to using them as a source of energy and even revising and rewriting events. Whereas magecraft is the realization of something that technology can accomplish but through supernatural means, Magic is a miracle, something that is impossible through science.

Zelretch can use the Second Magic in a variety of ways but the most well-known is through the Jeweled Sword Zelretch, a Mystic Code taking the form of a ritual dagger. Using this, he can access the magical energy within the endless sea of parallel worlds, giving him an effectively limitless pool of magical energy to use for his spellcasting.

Magecraft: Zelretch is an incredibly masterful magus, made evident by his high ranking title of Wizard Marshal within the Mage's Association. His mastery over magecraft is such that he is considered the pinnacle of magi. By utilizing the Second Magic in combination with a special magic circle called "magic square", he was able to unleash a 'virtually limitless' Ether Cannon.