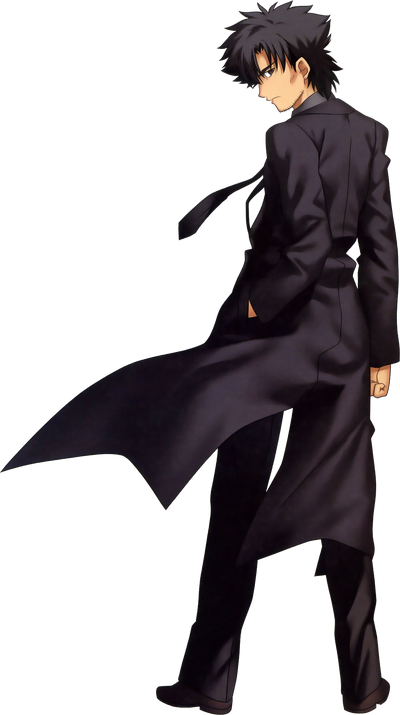 Kiritsugu Emiya is the true Master of Saber during the Fourth Holy Grail War, working with the Einzberns to secure the Grail. He is married to Irisviel von Einzbern and has a daughter with her, Illya. Wishing to be a Hero of Justice who would protect the weak ever since he was a child, he became cynical, using questionable methods to kill the few and save the many. This is due to several disillusioning events in his life, starting with his murder of his father, who was attempting to become a Dead Apostle. He became a freelancer and mercenary, working under his surrogate mother, Natalia Kaminski, and was branded the Magus Killer due to his skill in eliminating magi.

Originally planning to use the Holy Grail to bring salvation to humanity, after realizing its true nature, he orders Saber to destroy it, causing the Fuyuki City fire. Overwhelmed by guilt and shock, he discarded his dreams and emotionless facade. He adopted Shirou, one of the children orphaned by the fire, passing his ideals onto him shortly before his death.

Tier: 9-A, at least High 8-C with Preparation

Powers and Abilities: Superhuman Physical Characteristics, Limited Information Analysis, Expert Marksman, Magecraft, Enhanced Senses (Can give himself night vision with magecraft, and can detect magi in pitch dark conditions with the Walther WA2000, tracking their Magic Circuits), Hypnosis, Time Manipulation (Can speed up or slow down his own time), Biological and Soul Manipulation (His Origin Bullets cause necrosis and permanent nerve damage, on top of frying a magi's Magic Circuits, which are contained in the soul and expressed through the body, leaving them incapable of using magic), Limited Conceptual Manipulation (His Origin Bullets attack with his Origins of "Severing" and "Binding" to induce their effects, and are considered Conceptual Armaments), Preparation, Regeneration (Low-Mid through Avalon; allows him to regenerate from lethal wounds, such as his bones and tendons being torn apart due to Triple and Square Accel, and from having his heart and lungs crushed by Kirei), Resistance to Magic (All magi have primary resistance to magical effects)

Attack Potency: Small Building level (Can fight and wound Kirei), at least Large Building level with Preparation (Destroyed a skyscraper with C4). Ignores conventional durability with Origin Bullets (Against living beings, the Origin Bullets cause no visible wound or bleeding, instead causing necrosis and permanent nerve damage on impact, and are even more effective against those using magecraft, causing their magical energy to go out of control and fry their body and Circuits).

Stamina: High. Managed to survive All the World's Evil to live normally for years, even as it ate away at his mind and slowly killed him.

Range: Standard melee range, tens of meters to hundreds of meters with firearms (Can see and fire on a target from up to six hundred meters away with the Walther WA2000)

Intelligence: Kiritsugu is a professional assassin who true to his title, specializes in eliminating other magic-wielders. He is skilled in every manner of modern combat, from knife work to the use of firearms and explosives. He is also known for his extensive planning and extreme pragmatism, evacuating a building before collapsing it with some well-placed explosions rather than risk his life by facing Kayneth's traps personally. With the help of Avalon, he can fight Executors like Kirei Kotomine, the Church's elite heretic hunters, on even ground. However, he is always plagued with the guilt over the people he's killed and the decisions he's made to save the many (such as downing a plane full of Ghouls with his mentor and surrogate mother still inside).

Weaknesses: Kiritsugu's Innate Time Control takes a toll on his body; Double Accel pushes his body to its limits, while Triple and Square Accel would be lethal without Avalon. His Origin Bullets are ineffective against purely physical protections, such as military-grade armor, and can be rendered ineffective by using something else as a source of magical energy as opposed to the user's supply. Avalon is useless without his connection to Saber. Kiritsugu suffered a mental breakdown due to failing to save the lives of many people at the end of the Holy Grail War. After becoming cursed by Angra Mainyu, he slowly deteriorates over several years and also loses the ability to use magic. The affliction finally claimed his life at the age of thirty-four, five years after the end of the War.

Notable Attacks/Techniques: Magecraft: Kiritsugu is an average magus whose abilities mostly lie in his pragmatism and use of modern tactics and weaponry. The Emiya crest is carved into his back, although, due to his father's Sealing Designation, most of it was confiscated, and he possesses less than half of the original amount. By channeling magical energy into his eyes, he can see in perfect clarity even in the darkest conditions and has basic hypnotic abilities that can only be used against those with no magical resistance. Due to his research, he is knowledgeable on Bounded Fields and can penetrate them with incredible skill. He has two elemental affinities, Fire and Earth, which reflect his dual Origins, Severing and Binding.

These Origins are different from the concept of "destruction and rebirth"; there is no chance of recovery with binding, as even if you tie together a cut string, it will still be cut. It affects his entire life, making him incompetent when it comes to handling delicate machinery. However, he makes full use of his Origins with Origin Bullets, special conceptual weapons made from two of his ribs, ground into dust, with his soul preserved through magecraft, before they were sealed into sixty-six bullets. By the time of the Fourth Holy Grail War, he's used thirty-seven of them, and he brings twelve for use during the war.

These Origin Bullets carry on his Origins and actualize them within the target, which can cripple living creatures with ease. It doesn't leave any trace of a wound in the form of a bullet hole, but the affected body part will suffer from necrosis. Even though it may appear to heal on the outside, the nerves and capillaries underneath never recover, and the function of the limb is lost forever. It is even more effective against magi, affecting them even if they block with barriers by traveling through to the source of their magical energy - their Magic Circuits. Denser magical power for a sturdier boundary will only cause more harm. "Severing" causes the target's magical energy to ignore their pathways, violently flowing through their body and causing severe damage, while "Binding" binds together their Magic Circuits in a useless arrangement, making it impossible to stand anymore, let alone ever use magecraft again.

The only ways a magus can effectively protect against his Origin Bullets are to discard all their magical protections and guard against it through purely physical means or to draw their magical energy from something else instead of their Magic Circuits. During their fight, Kirei makes use of both methods, first protecting himself with Command Seal boosted Black Keys, and then swatting aside the second bullet, though it nearly tears his arm off. While one can recover from the wounds, the damage underneath remains, and even if a magus successfully protects themselves, an injury caused by the bullet can still permanently disable a limb.

Waxillium Ladrian (Mistborn) Wax's Profile (Base Wax and Kerry with Avalon were used. Speed was Equalized)