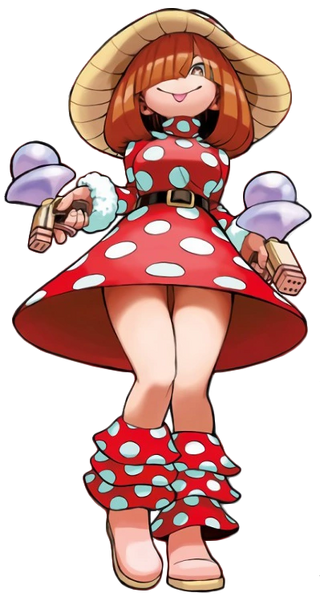 Kinoko Komori (小森希乃子 Komori Kinoko) is a student studying to become a hero at U.A. High School. Her hero name is Shemage and she dreams of becoming an Idol Hero.

Powers and Abilities: Superhuman Physical Characteristics, Fungus Manipulation (Her body produces mushroom spores that she can grow instantly and on any surface)

Attack Potency: Unknown (Monoma stated that she has very low combat abilities). Can ignore conventional durability with Mushroom (Her spores can suffocate others to death by blocking their airways)

Speed: Athletic Human with Supersonic reactions (Should be at least comparable to Hatsume)

Durability: Small Building level (As a hero-in-training, she should be at least comparable to Hatsume. Took a restrained hit from Dark Shadow)

Stamina: Unknown (She has yet to actually exert herself. She can seemingly produce spores endlessly)

Range: Standard melee range, tens of meters with Mushroom (She managed to cover the entire area around her with spores)

Intelligence: She can be a tricky fighter.

Weaknesses: Her mushrooms disappear after a few hours and she has poor general combat skills.

Mushroom: Kinoko's Quirk allows her to produce mushroom spores that she can grow on any surface, including her surroundings, her own body and her opponents' bodies. These mushrooms only last a few hours and grow faster in more humid environments. If someone were to breath in the spores, they could even grow inside their lungs.

Kinoko in her Civilian Clothes.
Add a photo to this gallery