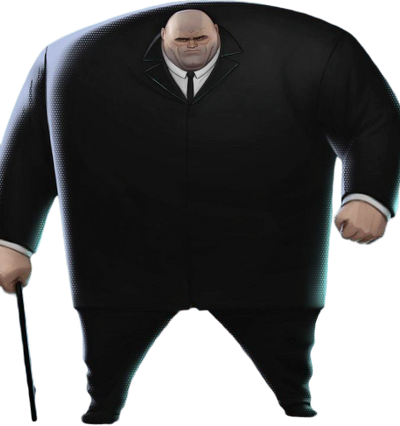 Wilson Fisk, alternatively and better known as Kingpin, is a character included in and is the main antagonist of Spider-Man: Into the Spider-Verse.

Lifting Strength: Class 25 (Lifted a car and motorcycle. Should be superior to Spider-Man)

Durability: Small Building level (Endured blows from Miles Morales and even withstood his Venom Strike towards the end of their battle)

Intelligence: Gifted. A ruthless and charismatic individual, Kingpin is highly sophisticated and manipulative, being an excellent advocator towards that of Alchemax by being one of its most adequate funders and benefactors. He as well appears to possess attentive knowledge of the multiverse, as he was able to devise a plan of accessing outside dimensions to once again see the ones he lost and loved so dearly via that of a cross-dimensional machine in which he assisted the creation and funding of. He is as well a worthy combatant.

Weaknesses: Devastated by his past

Start a Discussion Discussions about Kingpin (Into the Spider-Verse)