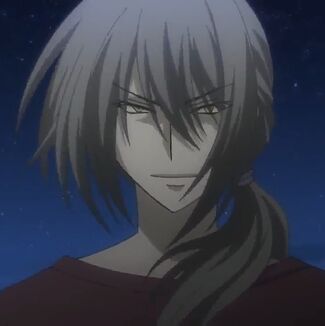 King of the Night, or Yoruno, is the primary antagonist during the first arc of KoreZombie. A long time ago, he was resurrected by Eucliwood Hellscythe as a zombie, which he was grateful for, and they got along well together with the 5 other members of their group, Seventh Abyss. Over the course of centuries however, his immortality bored him and, bereft of dreams and hopes, wanted to die, but couldn't due to being a zombie, and the only way was for Eucliwood to kill him with her powers. He then killed the leader of his own group to provoke Eucliwood into killing him. Instead, she told him to disappear with her powers. However, Eucliwood's order didn't translate to death, and Yoruno reappears in front of her centuries later, soon after the start of the series. Despite his past actions, Eucliwood refuses to kill him, not wanting to cause pain and suffering to anyone. He mind controls Kyoko and creates fake Megalo to create chaos on Earth and harm those close to Eucliwood so she will become angry enough to want to kill him.

Tier: At least 9-A, likely higher, higher with stat amp. At least 8-B with time bombs

Name: King of the Night, Yoruno

Attack Potency: At least Small Building level, likely higher (stronger than Kyoko, who's stronger than Ayumu Aikawa; on par with a casual Ariel), higher with stat amp. At least City Block level with time bombs (would have destroyed everything in a 1km radius)

Speed: At least Subsonic+ (Much faster than Seraphim)

Durability: At least Small Building level, likely higher (ignored most of what Masou-Ayumu threw at him, traded blows with Ariel)

Stamina: Very high, and far higher than Ayumu Aikawa. Dominated his fights against him, and outmatches even vampire ninjas. Can fight Ariel for a while

Intelligence: Calm and collected, he's able to formulate plans that almost always go his way, all the while fighting casually to reach his goals. Has massive experience in life and as a fighter. Can easily take on multiple opponents while taking the weaknesses of each into account. Has accumulated experience for hundreds of years

Weaknesses: Weak to light and fire. His regeneration speed is drastically reduced during the day

Retrieved from "https://vsbattles.fandom.com/wiki/King_of_the_Night?oldid=5773730"
Community content is available under CC-BY-SA unless otherwise noted.