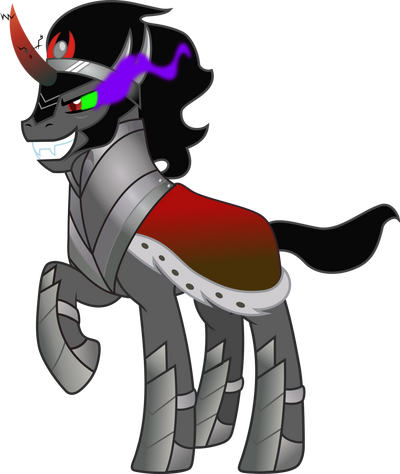 King Sombra is the fourth villain of My Little Pony: Friendship is Magic, and acts as the antagonist of the Season 3 premiere. A thousand years ago, Sombra enslaved the entire Crystal Empire, ruling through fear. He was banished by both Celestia and Luna, but after 1,000 years returned to take over, again. However, he was eventually destroyed by the Crystal Heart before managing to regain control.

Attack Potency: At least Solar System level, possibly Universe level+ (Required both Celestia and Luna to be defeated, and the Crystal Heart to be destroyed)

Speed: Massively FTL+ combat and magic speed (Superior to Twilight Sparkle at the beginning of Season 9)

Durability: At least Solar System level, possibly Universe level+ (Required the Crystal Heart to actually be taken down for good), Intangibility in his smoke form makes him difficult to kill

Stamina: Superhuman (Seems to be able to easily traverse the entire Empire in seconds without tiring out, could likely contend with one Alicorn)

Range: Tens of kilometers (At least the size of the Crystal Empire, was able to spread across the entire Empire in his smoke form and can likely reach farther. Should be superior to Rarity, who's magic can reach this far)

Intelligence: Likely Gifted, was able to take over and rule the entire Crystal Empire with an iron fist, was smart enough to know how to properly hide the Crystal Heart from all in such a good way it took Twilight in order to figure it out, was still able to outsmart Twilight and would've won if Spike did not step in on two separate occasions. Faked his defeat so he could follow the Mane Six and destroy the source of their power.

Weaknesses: Sombra is highly overconfident and tends to underestimate his opponents. He also has trouble thinking on the spot if his plans fail, not really having backup plans (threw a fit when the Mane 6 were still able to use the power of friendship even after he destroyed the Elements of Harmony). He can be destroyed with the Crystal Heart.