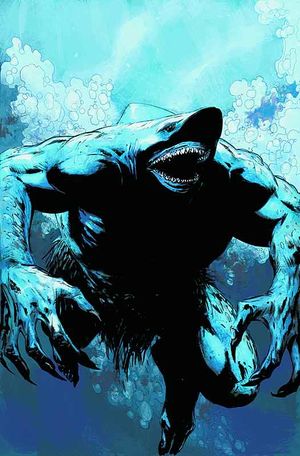 The son of a Hawaiian shark god known as Chondrakha and a human female called Kaikea, King Shark spent his days devouring humans near Honolulu. This led to him being captured by police officer Samuel Makoa, but when he was busted out of prison by the Silicon Dragons he eventually became an enemy of Superboy.

He later went on to join the Secret Society of Villains, the Secret Six and, after the Infinite Crisis event, became a mentor for a young Aquaman.

Powers and Abilities: Superhuman Physical Characteristics, Water Empowerment (Grows significantly more powerful while underwater), Enhanced Senses, Regeneration (Low-Mid, regenerated an arm over the course of a week, more or less), Animal Manipulation (Can control sharks), Statistics Amplification (Is stronger underwater), Natural Weaponry (Jaws and claws), Pain Tolerance (Getting his eye ripped out doesn't hurt him, and he even jokes about it)

Attack Potency: Solar System level (Has regularly matched Superboy out of the water and hurt Superman underwater, though he is no match for the latter on land)

Speed: Massively FTL+ (Can keep up with Kryptonians)

Lifting Strength: At least Class M (Has overpowered Aquaman with one arm, while drunk), possibly Stellar underwater (Pinned an angry Superman under mind control against a wall)

Weaknesses: Insane to a degree. Is stronger underwater than he is outside of it.