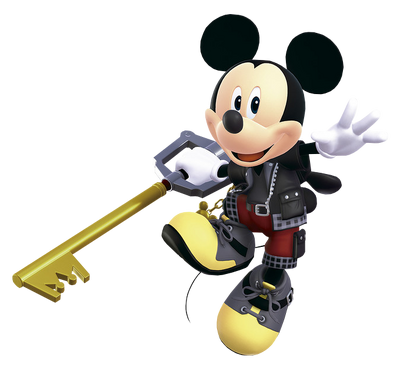 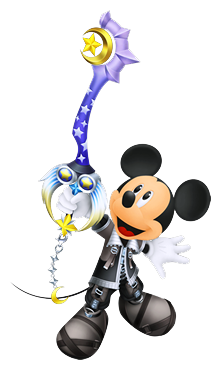 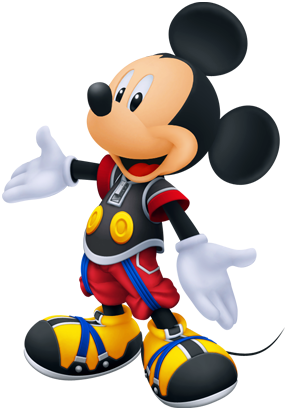 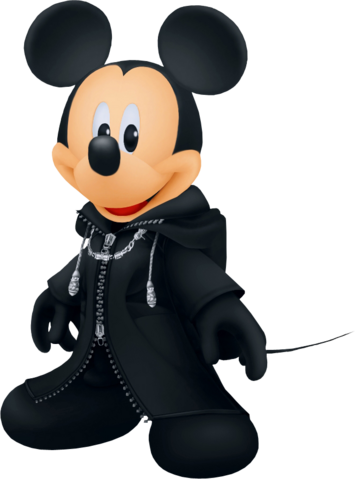 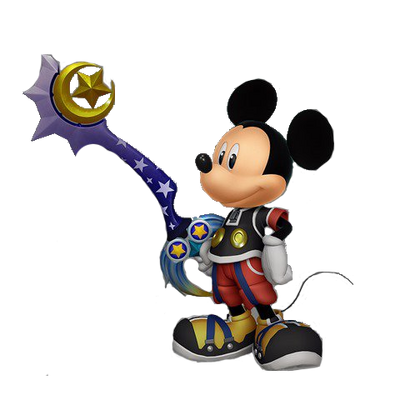 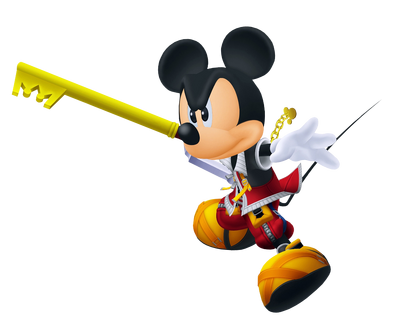 Mickey Mouse, formally referred to as The King, Your Majesty, or King Mickey, is the king of Disney Castle and a recurring character in the Kingdom Hearts series. He travels the worlds battling the forces of darkness and is a Keyblade Master, and the chosen Keyblade wielder for the Realm of Darkness, though he follows the path of light. Originally believing that the darkness had to be eliminated, he eventually realized that light and darkness are interdependent and cannot exist without the other due to his encounters with Riku.

Originally a ship's hand working with Captain Pete at Timeless River, Mickey eventually became a student of the Keyblade Master Yen Sid. Mickey was a main player in the conflict with Master Xehanort, and was later one of the first to notice the threat of the Heartless, inventing the first Gummi Ship to travel to other worlds in order to work against the monsters.

Classification: Mouse, Keyblade Wielder and Master, King of Disney Castle, Chosen Wielder of the Kingdom Key D, One of the Seven Guardians of Light

Superhuman Physical Characteristics, Vehicular Mastery (Capable of using the Gummi Ship), Magic (Time Stop (Via Stopga), Flight, Energy Manipulation, Magnetism Manipulation, Gravity Manipulation, Elemental Manipulation, Light Manipulation (Can use several light based attacks as a warrior of light), Darkness Manipulation, Teleportation, Spatial Manipulation, Healing (Via Curaga and Hi-Potion), Forcefield), Dimensional Travel, Portal Creation (The Keyblade can create portals), Power Bestowal (The user of a Keyblade can grant a variation of it to somebody else who is worthy of a Keyblade on purpose or accident by letting them touch it), Transformation (Can change his Keyblade's form and abilities using Keychains), Information Analysis (Via Scan which allows him to view his opponents health), Homing Attack (Via Holy and Pearl), Damage Reduction (Via Damage Control which halves the damage he takes if he's at low health), Master Keyblade Wielder, Size Manipulation (Minimizes enemies with Mini), Status Effect Inducement (Has a chance of stunning enemies with Holy, His D-Link (His power summoned by someone else) has the Sign of Faith technique which stuns enemies), Paralysis Inducement (His D-Link has the Binding Strike technique which binds some enemies in place), Can summon his Keyblade if disarmed, Telepathy (The Keyblade can react accordingly to what its user wants to do), Flight (The Keyblade is capable of Flight), Self-Sustenance (Type 1. Can breathe in space, rescued Ventus and Aqua from the Lanes Between without any sort of armor for protection), Nonexistent Physiology Existence Erasure (Can cause Nobodies to fade from existence, which have Nonexistent Physiology), Regeneration Negation (Unknown, can harm Heartless in a fashion that prevents them from coming back), Non-Physical Interaction (Can harm Nobodies, which have Nonexistent Physiology), Possible Causality Manipulation (Possibly possesses the Power of Waking, which allowed for Sora to rewrite the entire timeline), Immortality (Type 6. Can insert his "heart" into others to live indefinitely), Possession (The Keyblade allows its user to send their own "heart" free, which can then proceed to possess the target), Sealing/BFR (The Keyblade can seal things by locking the Keyhole of it, which includes pathways to other places), Sealing Negation (Keyblades can open the seals of multiple things, including the gates between "worlds"), Curse Removal (It was heavily implied that the Keyblade could remove Calypso's curse of being bound in a mortal body), Immortality Negation (Types 5 and 8. The Keyblade is the only weapon capable of releasing the "hearts" of the Heartless, and it was shown it can also destroy the skeletal forms of the pirates despite being neither alive nor dead)

Attack Potency: At least Large Star level (Is portrayed to be at least equal, and possibly superior to Sora and Riku. Helped Aqua defeat Ventus-Vanitas while the latter wielded the complete χ-Blade even though Mickey was still under Yen Sid's tutelage and thus not an official Keyblade Master) | Possibly Universe level (Should be comparable to Sora, Donald and Goofy)

Speed: Massively FTL+ (Is a very quick and nimble character on par with Sora and Riku)

Striking Strength: At least Large Star Class (Traded blows against Vanitas along with Ventus, should be above or around the same level as Sora and Riku) | Possibly Universal

Stamina: Extremely high (Survived the Realm of Darkness, which houses almost endless Heartless. Took the final stand against the Replica Xehanorts, despite being completely drained of energy, holding back all of them at once by the end.)

Range: Extended melee range with his Keyblade. Planetary with magic.

Intelligence: Very high; he is an expert Keyblade wielder (Even enough to grant him the title of Keyblade Master) and has wielded it for longer than any character short of Xehanort and Eraqus, governs his own world very efficiently, retains extensive knowledge on things pertaining to the verse, and trained under the wise and knowledgeable Master Yen Sid, was able to deduce exactly what was happening before anyone else and make a complicated plan to solve it.

Note: It's likely that he can also use most of the magic skills shown by other Keyblade wielders.

Sorcerer Mickey
Add a photo to this gallery