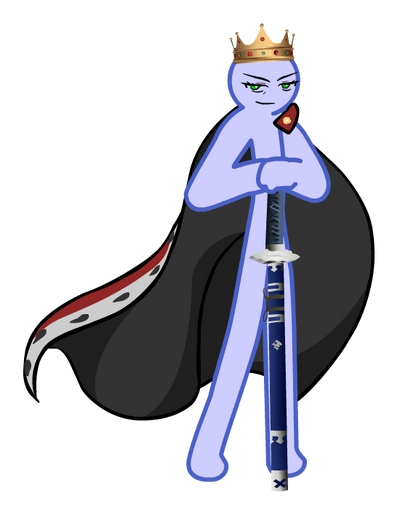 Loxias is the 4th prince of 5 children born to the mighty god king of the legendary Katana clan, a clan known worldwide for wielding six magicus Katana type weapons. These six weapons are earned by six individuals of the clan, and to earn the right to wield one is to become known as one of the most powerful individuals in the kingdom. Loxias wields 2 ancient katanas, and he is the second to do so, the only other person in history being the first king and founder of the Katana clan. Loxias showed great skills as a growing child and at the age of 20 succeeded his father as the youngest and 500th king of the clan. Loxias has sworn to brake the fate between his clan and Big-Hat-Man (BHM) and he is polishing his skills until the destined meeting, which is sure to destroy the fate of King Loxias or re-enforce his will to prevail against BHM.

Tier: At least 7-B, possibly 7-A, higher in Katana Mode, 6-C with Two Handed Wielding

Classification: Human/Stickman, King of the Katanadom, Divine Priest of The Ministry

Lifting Strength: Class T (Comparable to Larry, who can lift the leg of a small-island sized giant)

Intelligence: Gifted (Due to being the king of the Katanadom, Loxias is required to be bar none the single most skilled swordsman in his kingdom, where any citizen who is not able to use a katana to a master level is considered worthless in society. From a young age, despite his parents explicitly preventing him from receiving any training in swordsmanship, Loxias was able to gain a master level of skill with a katana just by observing others, and his skill grew so rapidly that at before he even reached the age of 12 he was able to wield two ancient katanas at once, a feat not seen since the ancient kings of the Katanadom which not even his mother, the 10th strongest and most skilled swordsman in the history of the Katanadom, was able to accomplish. Since then he spent every waking moment sharpening his skills, learning to fully utilize the fighting prowess of a katana, using not only the sharp edge but every part of the katana in battle)

Weaknesses: Gets tired if he uses TaxinGladus for too long or if his red afterimage is attacked. Cannot wield his sword with two hands for long.

Retrieved from "https://vsbattles.fandom.com/wiki/King_Loxias?oldid=5392094"
Community content is available under CC-BY-SA unless otherwise noted.