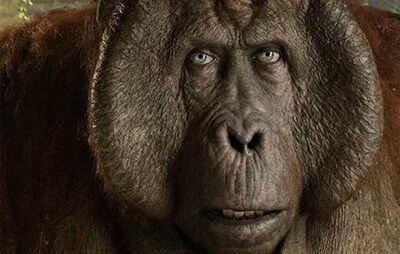 King Louie is an antagonist of the 2016 Jungle Book movie. He is an enormous gigantopithecus, who is the king of the primates in the jungle. He wants Mowgli to give him fire so that he can take over the jungle. He gets tricked into slamming through the pillars in a temple, which collapses on him.

Attack Potency: Wall level+ to Small Building level (He easily slammed through large pillars which brought a temple down)

Lifting Strength: Likely Class 5 (As a gigantopithecus, King Louie should at least be capable of bench-pressing his own weight and should at the very least be comparable to real gigantopithecuses. King Louie was described by Christopher Walken as being around 12 feet tall (3.6576 m) as opposed to a real Gigantopithecus' height of 3 meters, which should make his weight much greater)

Durability: Small Building level (Survived the temple collapsing onto him)