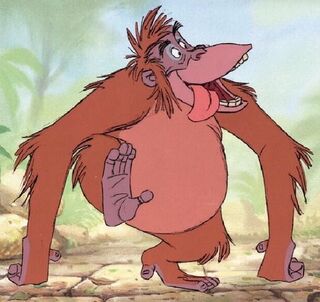 King Louie is a minor antagonist introduced in Disney's 1967 adaptation of the Jungle Book. Unlike in the 2016 adaptation, King Louie was an orangutan.

Attack Potency: Wall level (Was capable of breaking pillars that almost collapsed a temple, and later survived its collapse)

Speed: Superhuman (Scales to Baloo who was capable of keeping up with Shere Khan. Tigers can run up to 40 miles per hour)