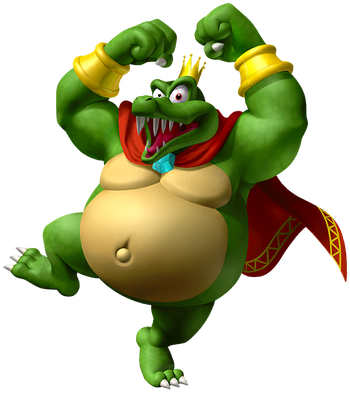 King K. Rool is the King of the Kremlings and the arch-nemesis of Donkey Kong as well as having been enemies with the Kongs for years, most of his plans had been trying to steal Donkey Kong's bananas but have always failed, despite this, he continues to do so in hoping he'll win one day and get rid of the Kongs for good.

Tier: 6-B, higher with Crystal Banana

Speed: Massively Hypersonic (Can keep up with Dixie and Kiddy Kong, who are capable of dodging and outrunning lightning)

Stamina: Very high (Continued fighting Diddy and Dixie after taking a punch from Donkey Kong, falling off a mountain, and being attacked by a horde of sharks)

Standard Equipment: Various weapons ranging from his crown he uses as a boomerang to a Blunderbass

Intelligence: Genius (Was able to create complex gadgets and machines)

Weaknesses: His own incompetence 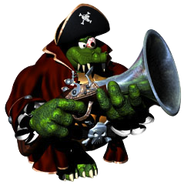 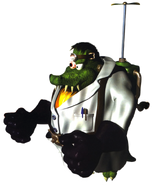 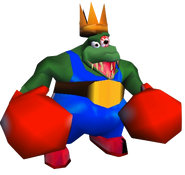 King K. Rool as a boxer.

King K. Rool in Mario Super Sluggers.
Add a photo to this gallery