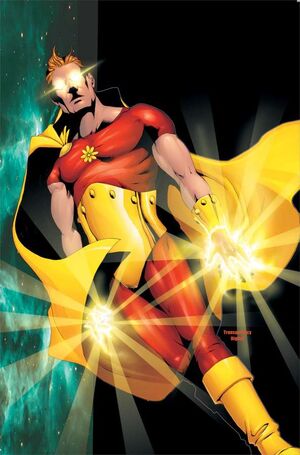 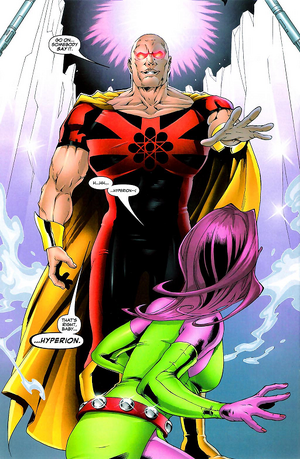 An alternate version of Hyperion.

When this version of Mark Milton gained his powers, he decided to conquer and enslave his Earth. He killed all of his world's heroes and, with no meaningful opposition, gained control of the planet. However, humanity decided that it would rather die than be enslaved to King Hyperion and fired every nuclear weapon on the planet at their new tyrant in a last, desperate effort to kill him. However, Hyperion survived while the Earth was wiped of all life and ruined in the aftermath of the nuclear holocaust.

Hyperion was left alone on the dead planet before he was recruited by the Timebreakers to serve on one of their reality hopping teams, Weapon X. Now free of his decrepit world, King Hyperion seeks to establish his reign anew and destroy anything that stands in his way.

Speed: Massively FTL+ (Able to keep up with Blue Marvel)

Lifting Strength: Unknown, possibly at least Class 100 (Can lift much higher than 100 tons according to the Marvel guidebooks)

Durability: Solar System level (A pummeling from Juggernaut does little damage and only enrages him)

Intelligence: Above Average, constantly trying to leverage situations to his advantage. Tends to learn from his mistakes

Weakness: Due to his overall high level of power, Hyperion is extremely overconfident and self-assured. This has lead him to dropping his guard or not finishing off his opponent when he has the chance. While Hyperion can resurrect, his body requires daylight/solar energy to do so and will not revive until his body has fully healed. This process also takes an unspecified period of time. Extremely vulnerable to argonite radiation