VS Battles Wiki
Register
Don't have an account?
Sign In
Advertisement
in: Characters, Fate, Nasuverse,
and 34 more 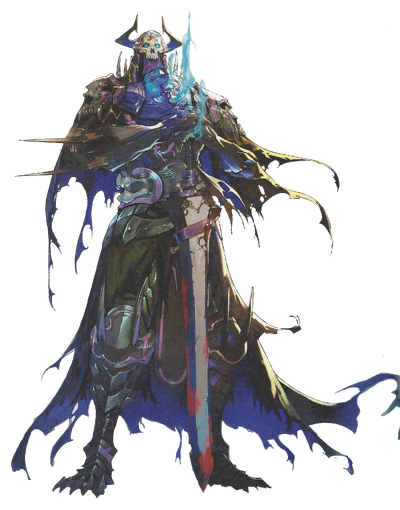 Grand Assassin is the Grand Assassin Servant that appears in the sixth singularity, Camelot as an ally against the Lion King after throwing away his Grand title to return a favor to Chaldea. He later appeared again in the seventh singularity, Babylonia, disguising himself as Ziusudra, to give helpful advice to Ritsuka Fujimaru to deal with the Goddesses. During the final battle with Beast II, he reduced his Saint Graph to that of a regular servant to weaken and inflict the concept of death upon her.

His name is Hassan-i-Sabbah, the founder of the Hashashin sect and the one regarded as the first and last Old Man of the Mountain. Despite being the founder and allegedly the first leader of the sect, there is no proof of his existence, with even his eighteen successors and the rest of the sect having never known his true identity. Regardless he is a legendary Assassin that is regarded as the Hassan of Hassans. When they fester, fall into depravity, request his assistance, or walk the wrong path, he appears to end their life and take their head. He is nicknamed by Ritsuka Fujimaru as "King Hassan" to distinguish him from the other Hassan-i-Sabbah, who was summoned into the same period as him during the events of the sixth singularity, to which he pays no mind to it and accepts it as such.

Powers and Abilities: Superhuman Physical Characteristics, Possession (Non-combat applicable), Statistics Amplification (Can temporarily rank up his Strength stat with his Natural Body skill), Mind Manipulation (controlled Hassan of Serenity and made her attack her allies during the Camelot singularity), Teleportation, Fire Manipulation (Can emit blue flames with his strikes. Can cause eruptions of blue flames with a stare), Weather Manipulation (Can create and control sandstorms), Immortality (Type 2: Can continue fighting at full strength even with lethal injuries or if half of his body is destroyed), Limited Power Nullification, Servant Physiology, Invisibility and Stealth Mastery with Presence Concealment (Presence Concealment users with B-rank or higher are capable of rendering themselves invisible by erasing their presence, making themselves difficult to detect against Magi and even Servants unless they attack), Master Swordsman (On par with to any of the Knights of the Round Table), Death Manipulation with At the Boundary and Evening Bell (King Hassan has a slim chance of instantly killing any being he cuts, no matter how minor the wound may be. He is also able to destroy abstract things such as unspoken contracts. Furthermore, he can exterminate an opponent in a similar way to the Mystic Eyes of Death Perception, by killing their “fate”), limited Conceptual Manipulation, Soul Manipulation and Statistics Reduction (Was able to insert the concept of death into Tiamat and reduce her Saint Graph to that of a regular servant, at the cost of his Grand level Saint Graph), Can nullify his foes' resistance to instant death, Resistance to Death Manipulation and Fear Manipulation (At the Boundary grants him high resistance to instant death and fear) and Soul Manipulation (His Protection of the Faith skill gives him "absoluteness of body and soul")

Attack Potency: Island level (Boasts an A-rank in strength, making him comparable to the Knights of the Round, such as Lancelot with Arondight drawn. Matched a weakened Gawain), higher with Natural Body (Can temporarily rank up his Strength stat, making him much stronger than normal), Azrael and his other abilities ignores conventional durability | Low Complex Multiverse level, possibly Complex Multiverse level (As a Grand Servant, King Hassan is tasked by the World to fight against the Beasts, shown by his ability to sever Tiamat's wings when encountering her in Babylonia)

Speed: Massively Hypersonic (Has an A-rank in agility, making him comparable to the members of the Knights of the Round) | Massively FTL+ with Immeasurable reactions and combat speed (Should be several times more powerful and swift as a Grand Servant and should be comparable to most Beasts, such as Tiamat).

Lifting Strength: Class K (Comparable to Martha who stopped a speeding train, Achilles who stopped a rolling 300 ton jumbo jet, and Asterios who swam carrying the 100-150 ton Golden Hind galleon ship while injured) | Immeasurable (Should be higher than the likes of Kiara Sessyoin)

Stamina: Very High (Servants can fight for an entire day without tiring and continue fighting for as long as they have sufficient mana. King Hassan can keep fighting even with lethal injuries)

Range: Extended melee range with his sword, Unknown with Teleportation and Azrael

Standard Equipment: His great-sword and armor

Intelligence: King Hassan, with the nickname "Angel of Death," is an assassin grandmaster with his original teachings and name being passed down for hundreds of years. His skill is such that it's said that no matter how strong or weak a Servant is, they are all just one life before his blade. Despite his class's tendency to avoid direct combat, King Hassan is a master swordsman on par with any of the Knights of the Round Table, allowing him to take the fight directly to those he cannot cut down such as Gawain as he was able to hold him off for an hour while not slowing down his pace. While rigid in his code of conduct and unshakeable faith, he is a reasonable figure, acquiescing to the Cursed Arm Hassan's requests after the latter offered his life in exchange and later let his successor go free after the Assassin's cursed arm was destroyed. King Hassan was also the renowned and respected leader of the medieval Islamic order. He commanded legions of followers who obeyed his every command, with all in the Hashashin's grasp, knowing that the appearance of the skulled swordsman meant certain death.

Weaknesses: King Hassan is cursed so that he is instantly revealed when he begins his attack. King Hassan only kills his opponent if the Evening Bell tolls and can't pick who he has to kill. King Hassan can only embed the concept of death into his opponent by reducing his Saint Graph to an average servant level. His instant death effects to his regular attacks only have a low probability of happening.

Azrael: Angel of Death: The Noble Phantasm of King Hassan, the act of decapitation with an ordinary great-sword that's dyed in the absolute faith of a man that spent a life-time wielding it. As King Hassan walks at the boundary of the valley between life and death, the sword can terminate the life of any being it cuts, no matter how minor the wound may be. However, the chance of this happening is slim. Those slain by this blade die without pain, suffering, or regrets, though there is fear, dread, and repentance.

At the Boundary: King Hassan's unique Class Skill he possesses as one who walks at the boundary of the valley between life and death, it gives his sword the ability to terminate the life of any being it cuts. While the chance is slim, it presents a danger to anyone, no matter how formidable the enemy is. Due to being in the valley, he has become one with death, granting him incredible resistance to instant death effects as well as charming and fear effects.

Independent Action: The ability to remain independent and exist in the world without the magical energy supplied by a Master, allowing the Servant to act autonomously and the Master to save their own magical energy for spells. Due to having attained a faith that is so pure that he removed his flesh and organs, King Hassan can act at his own discretion by pure will alone. King Hassan's B-rank in this skill lets him remain in the world for two days without a master, assuming he tries to conserve as much magical energy as possible.

Magic Resistance: An innate ability that grants protection against magical effects. Unlike the Resistance effect that merely rejects Magical Energy, this ability cancels the spells altogether. King Hassan's B-Rank Magic Resistance cancels spells with a chant below three verses. Even if targeted by High-Thaumaturgy and Greater Rituals, it is difficult for him to be affected.

Presence Concealment: The ability to hide one's presence as a Servant. Although his sneaking skill is virtually flawless, a curse inflicted on him long ago makes it so that his targets would discover his presences in the form of a premonition of the death the moment he makes his attack, even if he were to get a perfect success in his stealth check. Due to the curse, his rank is lowered to A-Rank compared to the A+ Rank of his successors. Despite this curse, he is still an incredible Assassin, having able to infiltrate Ozymandias's temple, decapitate him and quickly retreat right after by the time the latter caught his presence and tried to retaliate.

Battle Continuation: A skill that reflects one's exceptional vitality and endurance, allowing the user to fight on despite grievous wounds and escape safely even when defeated. King Hassan has an EX-Rank in this skill due to being in the valley between life and death, allowing him to continue fighting at full strength even if he suffers a fatal wound or if half his body is destroyed.

Evening Bell: The evening bell which signals the arrival of death and announces a funeral to all, a unique skill that Hassan possesses due to having become one with those rites of the passing and coming of death. It allows him to grant salvation in place of God to those who have "lost sight of their moment of death," allowing him to end their life in a similar way to the Mystic Eyes of Death Perception, by "killing" their fate. As such, it's said that when the targets finally saw him, they knew their fate was sealed. However, King Hassan did not personally choose who he would kill and only did so by God's will.

Protection of the Faith: A form of divine protection which preserves the "absoluteness of one's body and soul," rendering Hassan practically resistant to mental interference of any kind as well as giving him resistance to attacks to his soul. It's only available to those who have sacrificed themselves for a religious view. Despite being a form of divine protection, it is not a blessing from a higher existence.

Natural Body: The possession of a perfected body from birth that is naturally strong without exercise and will not change no matter how many calories one consumes. King Hassan originally possessed an A-Rank in this skill. However, it has been downgraded to C because of his own body modifications in the name of his faith.

Uncrowned Arms Mastership: Unless his True Name is revealed, King Hassan's swordsmanship, Riding, and Divinity-related skills appear one rank lower than they actually are, and the appearance of his attributes are reversed, which can make his foes underestimate his actual combat prowess.