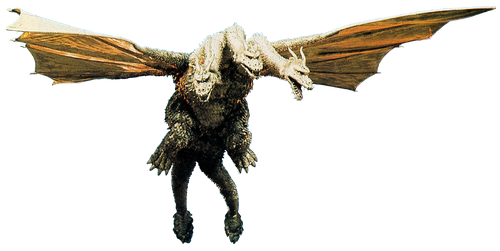 In the Showa series, King Ghidorah is an alien dragon said to have attacked Venus under his own power many thousands of years ago, wiping out the planet's entire civilization. He later attacked Earth, but was repelled by Earth's monsters Godzilla, Rodan and Mothra.

Speed: Subsonic Movement Speed (Outpaced Anguirus and Godzilla), Subsonic Attack Speed (His Gravity Beams are this fast), Supersonic Reactions and Combat Speed (Can keep up with Godzilla and Anguirus) Supersonic+ Flight Speed in the atmosphere (Can fly at Mach 4), Massively FTL+ Flight Speed in Diamond Form (Traveled from the Space Hunter M Nebula to Earth within minutes on more than one occasion)

Lifting Strength: At least Class M (Superior to Godzilla, who lifted and threw kaiju his own weight, threw Anguirus who weighs as much as himself)

Range: Tens of meters by sheer size; Hundreds of metres with energy attacks

Weaknesses: Rather slow in the Earth's atmosphere