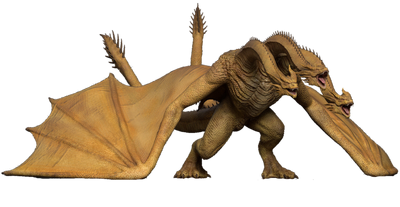 The King Ghidorah (キングギドラ, Kingu Gidora) of the MonsterVerse, also dubbed Monster Zero and Titanus Ghidorah, is a giant three-headed dragon daikaiju created by Legendary Pictures that appears in the Legendary's 2019 film, Godzilla: King of the Monsters, as one of the two primary antagonists.

Tier: At least 6-B, higher with Energy Absorption, Possibly High 6-A with Weather Manipulation.

Name: Ghidorah, Monster Zero, The Devil, Death Song of Three Storms, The One Who is Many, False King, Larry, Moe, and Curly

Classification: Alien Titan, claimant of the position of Alpha Predator of the ecosystem, Titanus Ghidorah

Powers and Abilities: Superhuman Physical Characteristics, Flight, Enhanced Senses (Can hear sounds from supposedly thousands of miles away), Electricity Manipulation and Energy Absorption (Could absorb electricity and the energy of Godzilla through biting), Air and Weather Manipulation (Created Category VI hurricanes), Regeneration (At least Mid. Regenerated a lost head shortly after surviving his second encounter with Godzilla. Can possibly regenerate his entire body from his head), Natural Weaponry (Jaws and Tails), Radiation Manipulation (Can absorb radiation), Multiple Personalities (The middle head appears to be the leader), Immortality (Types 1, 2 and 3. He is millions of years old, and his heads can live independently if severed. Regenerated his left head after being bitten off by Godzilla), Skilled in stealth, Self-Sustenance (Type 1 and 2), Large Size (Type 2 158.8 meters tall), minor Body Control (Can retract the claws on his tails if needed to), Possibly Resistance to Matter Destruction (Unaffected by the Oxygen Destroyer, which has been previously described as a bomb that destroys the oxygen in its radius on an atomic level), Irregular Physiology (Stated that his resistance to the Oxygen Destroyer was due to his alien biology), Resistance to Freezing temperatures (Survived being frozen in Antarctica) and Magma Manipulation and Heat Manipulation (Stood in burning lava).

Attack Potency: At least Country level (Easily overpowered Godzilla. Likely superior to MUTO Prime. Created a Category VI hurricane, which was generated by Ghidorah's flight), higher with Absorption (Absorbed energy from a power plant and Godzilla himself and overpowered Godzilla who had just been freshly recharged by a nuclear bomb), Possibly Multi-Continent level with Weather Manipulation (Was causing massive storms to appear all over the Earth, would have reshaped the world after leading the rest of the Titans.)

Stamina: Very high (Throughout the short timespan from being awakened, Ghidorah fought Godzilla three times and Rodan, the former being amplified in their last encounter.)

Intelligence: At least High Animalisitc. Is animalistic, but can adapt to fighting styles of Godzilla. Easily identified where Madison and ORCA is. Made a plan to reshape the planet and understood that Godzilla was behind him by looking at his reflection. Each head possesses a different cognitive function.