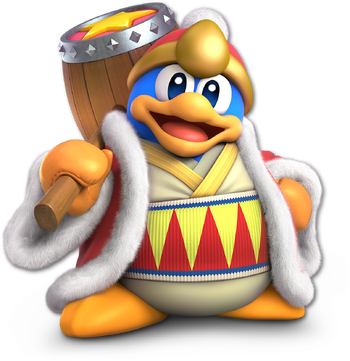 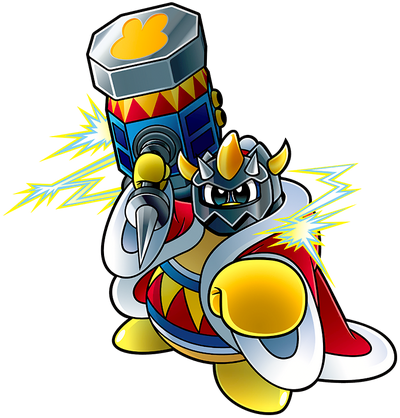 King Dedede is Kirby's arch-rival and a primary character in the long-running Kirby series, appearing in every game except Kirby & the Amazing Mirror and Kirby and the Rainbow Curse, making him the most recurring major character of the series besides Kirby and Waddle Dee. He is the greedy self-proclaimed king of Dream Land, which is located on the quaint planet Planet Pop Star.

Due to an ambiguous description of the geography of Planet Pop Star, it is never made entirely clear how much of the planet King Dedede assumes leadership of, though he seems to have castles and fortresses all across the planet. Even so, he seems to perform no administrative functions, and for the most part, the planet seems to ignore any edicts that are issued by him.

Superhuman Physical Characteristics, Self-Sustenance (Type 1), Non-Physical Interaction (Can affect Wapod Pots and Void Soul), 4th Wall Awareness, Toon Force, Regeneration (Mid. Like all Star Allies, he can quickly recover from being crushed flat, as well as from being impaled by allies or by Flamberge's Barbecue Party), Immortality (Type 3), Flight, Vehicular Mastery, Skilled with his hammers, and an axe, His hammer can catch on fire, Explosion Manipulation (Can throw large amounts of bombs. His Amiibo allows Kirby to use an unlimited amount of them. Can throw explosive hammers), Air Manipulation (Can shoot out small air puffs. Can inhale foes & things and create cyclones while doing so), Transmutation (Can spit inhaled foes as stars via Star Spit), Energy Manipulation, Projection & Absorption (Can project energy via Team Attack after charging power with allies, and assist them to use their own different Team Attacks. Can borrow energy from outside sources), Shockwave Creation, Summoning (Can summon and throw Waddle Dees, Gordos, Hammers, and equip himself with a Mechanical Hammer [Which can shoot missiles, turn into a flame thrower and generate electrokinetic waves] and a Mask), Statistics Amplification with said Mask, Electricity Manipulation & Status Effect Inducement (Fired electricity from his bare hands in Pinball Land, paralyzing the flippers with it), Teleportation, Can deflect projectiles away (Via Hammer Swing and with his axe), Homing Attack, Limited Deconstruction (Can send bolts to drop entire rows of blocks in whatever direction he's facing), Can turn into a small ball of intangible energy, double bass dexterity (Shown in official art)

Resistance to Transmutation (While he has been transmuted several times, he always kept his consciousness and at least basic functions such as when he could still use his hammer while turned into a limbless ball), Existence Erasure (Can get hit by Drawcia's deletion wave and survived quite easily), Mind Manipulation & Madness Manipulation (Became unaffected in places where Dark Matter has their influence and mind-controlling clouds, such as Ripple Star and Dark Star, a planet made out of Dark Matter, including those clouds. However, he's still vulnerable to their possession), Gravity and Radiation Manipulation (Able to outrun and withstand black holes from Sphere Doomers, Master Crown-powered Magolor and Marx [The latter shown Post-Star Allies]. Notably able to briefly outrun and survive a black hole that was warping & sucking all the space of the shown battlefield, including stars in the background of it), Spatial Manipulation (Physically unaffected by said interstellar distortion and the sudden return to normal space has when the attack ends, otherwise only harmed if sucked by that black hole or reached by any space-based attack from Magolor)

As before, Magic, Resurrection (Able to revive others via Revival Spell), Empathic Manipulation & Morality Manipulation via Friend Hearts (Can turn enemies into allies. Able to overwrite Void Termina's effects on allies; Scales to his multi-galactic potency), Healing & Purification (Friend Hearts can be used to heal and purify others. Can "Revive" defeated allies, who are merely unconscious), Cloth Manipulation, Power Bestowal (Turning targets into allies via Friend Hearts gives them that same power. Can bestow individual elemental powers when using them himself), Able to combine powers with allies to enhance elemental attacks (Also gaining access to Ice Manipulation and Water Manipulation), Creation (Can help other Star Allies create Friend Stars and the Star Allies Sparkler)

Resistance to Transmutation (Like all Star Allies, he isn't transmuted after being cooked inside Chef Kawasaki and Cook Kirby's pot, a process that regularly turns foes and items into food), Morality Manipulation & Empathic Manipulation (Became unaffected by the presence of the individual Dark Hearts after having similar powers bestowed to him), heat and cold (Unaffected by the temperatures of Blizzno Moon and Star Lavadom)

Speed: Massively FTL+ (Although slightly slower than them, Dedede's consistently depicted as being able to keep up with Kirby and Meta Knight, when the latter is able to keep up with the Warp Star and the former kept up with those who could match said vehicle's speed. Reacted & used his cannon to tag Mr. Star flying at incredible speeds, who can easily fly pass stars. Repeatedly outran waves that were consuming interstellar parts of Another Dimension, which were moving fast enough to get past stars and nebulae in the background, as well as keeping up with the Lor Starcutter and Landia, the latter of which he kept up with in combat. Reacted and briefly outran a Jamba Heart flying towards him, which were suddenly scattered across the universe; Dedede is comparable to, and can join the Star Allies, who were able to chase and keep up these Jamba Hearts multiple times. Able to keep up with everyone in the Jambastion cult and Void Termina, who in turn was able to keep up with an improved version of the Warp Star. Able to move even faster with Invincible Candy, Boost Orbs & Power-Up Hearts for a limited amount of time)

Lifting Strength: Likely Class Y (Comparable to Kirby, who defeated and is vastly superior to Star Dream in its Nova form)

Standard Equipment: His hammer and bombs.

Intelligence: Average. He steps up the intensity of his plans and even creates and improvises strategies very fast. Possesses vast combat skills due to being able to contend with, and defeat being as experienced as Galacta Knight, Coily Rattler, Queen Sectonia, Meta Knight, Hyness and Void Termina

Note: Dedede is sometimes shown using mechs, weapons and technology; As far as we know, and contrary to popular belief, he's not the one creating any of them. However, outside of the continuity of the games, at least one non-canon version of him is actually the one inventing all of that technology, notion seemingly contradicted by the little information about this we have in the canon, such as when WoG was talking about his power-amplifying mask only to immediately remark that "nobody knows where he got it..."

Powers & abilities few characters have in the verse, or that Dedede has in a higher scale.

If King Dedede has one of these items when he is KO'd, it will automatically revive him to full health in a flash. It can also be used in the middle of combat as a normal Maxim Tomato.

When collected, King Dededede becomes invincible for a short time, and almost any enemy he touches will be instantly defeated, or at least damaged.

A vehicle that King Dedede can use, its charge attack is a powerful dash attack.

Another vehicle that he can use, its charge attack is a powerful electroshock that comes from its mouth area.

The Final Weapon in Star Allies, used to take out Void Termina. The Star Allies Sparkler fires projectiles from the tip, fly around quickly and efficiently, and spin counterclockwise to avoid all damage on a relative scale (Sparkler Turn). Kirby canonically took the lead in the center of the Sparkler while his friends rode in the tail. Still, the leader can be rotated to imbue the shots with a different element depending on the leader (the technique is called Rider Switch). The Sparkler can fire different homing projectiles with varying power depending on charge time. An uncharged shot is called the Sparkler Comet, and it fires a star shaped projectile. A charged shot is called the Sparkler Starshot, and it fires a projectile shaped like two intertwining stars. The strongest attack is called Team Star Allies!, which, if everyone who's riding charges together and releases at the same time, fires a giant laser at the opponent. King Dedede uses this item on his own when used in The Ultimate Choice of Star Allies. 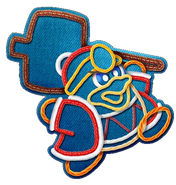 King Dedede made out of yarn in Extra Epic Yarn

Dedede under the effects of the Sparkling Star

"Surely King Dedede would never steal all the food in the kingdom and hoard it for himself... Why would he do such a vile deed?! Such questions will have to wait, as the king is coming for his eternal rival with all the fury of a wild beast!" VS King Dedede • Kirby Star Allies
Add a photo to this gallery

Doctor Ivo Robotnik (Adventures of Sonic the Hedgehog) Robotnik's Profile (Supreme High Robotnik and Post-Star Allies Dedede were used, both had all equipment and a week of preparation, and speed was equalized)