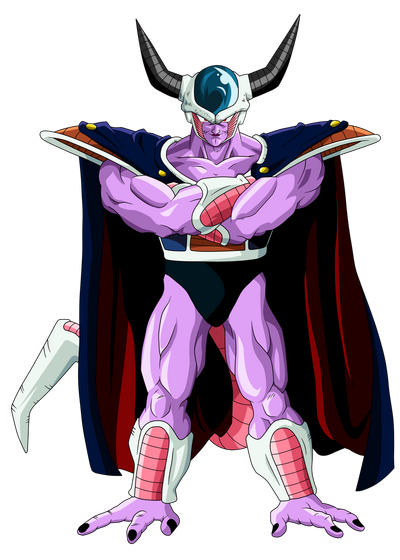 King Cold is the father of Cooler and Frieza, and the "secret" leader of the Frieza Force. Like Frieza and Cooler, King Cold's name also refers to low temperatures.

Power and Abilities: Superhuman Physical Characteristics, Acrobatics, Skilled Martial Artist, Flight, Spaceflight, Ki Manipulation (Can be used defensively and offensively, to strengthen his skin or to fire ki blasts, which can home in on targets and form defensive barriers), Telekinesis, Can alter his body structure and create a lower form, Immortality (Type 2) (King Cold should be capable of surviving things such as being cut in half or even diced to pieces, though he cannot regenerate and is left helpless when wounded more extensively), Self-Sustenance (Type 1), Resistance to Extreme Cold and Cosmic Radiation

Attack Potency: Small Star level (Comparable to Frieza, and was stated to have been the only one to harm him in his final form before Son Goku)

Durability: Small Star level (Should be as durable as Frieza)

Stamina: Very high (Continued to plead with Trunks after getting a hole blown through his chest)

Standard Equipment: His Battle Armor, Trunks sword for some moments.

Intelligence: Cold is fairly intelligent and was the secret leader of the Frieza Force. He is shown to be fairly tactical and pragmatic, as he recommended destroying Earth from space and tried to convince Trunks to join him after realizing his capabilities. When Trunks refused, Cold manipulated him into giving him his sword. However, he can be poor at judging a fighter's true power, as he mistakenly believed that Trunks stood no chance against him without his sword, despite clearly seeing Trunks lift Frieza's Death Ball with one hand.