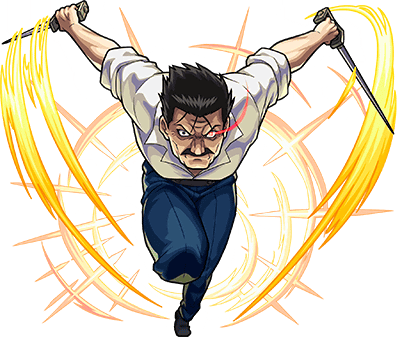 King Bradley (キング・ブラッドレイ, Kingu Buraddorei) is one of the primary antagonists in the Fullmetal Alchemist series, being that he is one of the seven Homunculi. Bradley was also the original Führer (大総統, Daisōtō) of Amestris. In the manga series and the 2009 anime reboot, he was known as Wrath, the final homunculus created by Father. Bradley is the leader of Amestris and is seen to have almost inhuman swordsmanship. As Führer, Bradley is the respected Commander-in-Chief of the State Military, even though his political standpoints are often questioned in certain instances such as the Ishval Civil War, which was only one of many insurrections focused on creating a massive Philosopher's Stone for Father.

Attack Potency: Building level (Can injure Scar even while weakened, and casually took out Buccaneer)

Durability: Building level (The combined forces of Buccaneer, Fu and Greedling were needed to injure him)

Stamina: Very high (Was able to fight despite grievous injuries)

Intelligence: Above average (Managed to rule an entire country for most of his life)

Weaknesses: His old age has diminished his stamina and strength, and destroying his Ultimate Eye will rob him of its abilities. 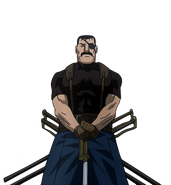 Retrieved from "https://vsbattles.fandom.com/wiki/King_Bradley?oldid=6156401"
Community content is available under CC-BY-SA unless otherwise noted.