King Arthur (Legend of the Sword) 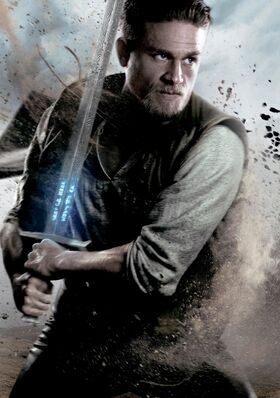 Arthur Pendragon is the titular protagonist of Guy Ritchie's 2017 film, King Arthur: Legend of the Sword. Raised on the streets, Arthur grew unaware of his royal lineage, not knowing that he was the only son of Uther Pendragon, former king of Camelot who had been usurped years before by his brother Vortigern. Upon obtaining the legendary magic sword Excalibur, Arthur ends up joining a group of resistance fighters to overthrow Vortigern's evil rule.

Powers and Abilities: Martial Arts, Weapon Mastery | Superhuman Physical Characteristics, Magic, Magic Senses (Can see magical creatures hidden from the eyes of non-mages), Shockwave Generation, Astral Projection (Relived the past, seeing his father's death), Some degree of Precognition (Saw how the remainder of his fight with Vortigern would have played out)

Attack Potency: Athlete level | Small Building level, likely Building level (With Excalibur, Arthur can create shockwaves with his sword swings, sending multiple armored soldiers flying away. Fought against Vortigern, who had become as powerful as Mordred before him, who could vaporize humans with his magic. Upon killing Vortigern, his magical tower collapsed as a result)

Speed: Athletic Human | Subsonic (Reacted to and cut through arrows without even looking, while also simultaneously fighting multiple soldiers)

Stamina: High (Can fight against numerous opponents without tiring. Could ride a horse for several kilometers after being infected with snake poison)

Intelligence: High. Despite living on the streets with no formal education, Arthur thrived in his environment, leading a very successful street gang. A skilled warrior and swordsman, having learned various techniques from people of different backgrounds, like a Chinese kung-fu master and Viking sailors.

Weaknesses: Average Human weakness without Excalibur. Originally could not properly use Excalibur due to the trauma of his parents' death.