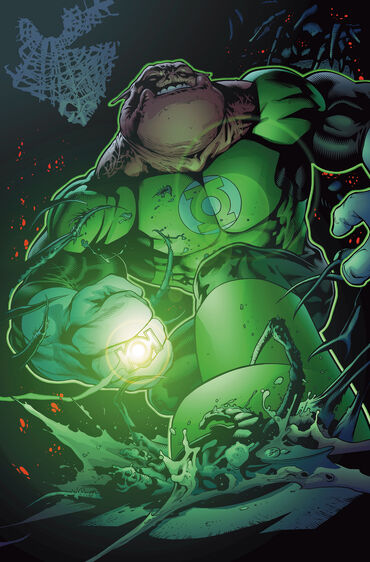 A geneticist and one of his home planet's most brilliant minds, Kilowog was chosen to become the next Green Lantern of his sector by "the mass" (the communal mind-force of the planet Bolovax Vik's population) after the previous one, Branwilla, died under unspecified conditions.

Unfortunately, while the honor of this task was great, Kilowog was forced to take great leaves of absence from his home as part of space missions, effectively a form of exile, which was heavily taxing on an extremely social species like Bolovaxians. Nonetheless, he continued his Lantern duties with pride, eventually becoming one of the Corps' best assets, as an infamously-tempered but extremely effective drill sergeant.

Powers and Abilities: Superhuman Physical Characteristics (Bolovaxians are far stronger than the average human), Genius Intelligence, Telepathy (Via the Communal Mind Link with the rest of his species), Bestowed by the GL Ring - Space-Flight, Willpower Manipulation and Empowerment, Energy Manipulation and Absorption, Weapon Creation, Matter Manipulation, Dimensional Travel and Limited Manipulation, Healing, Limited Reality Warping, Time Slow, Automatic Forcefields, Intangibility (Must be activated), Hacking and Data Processing/Transmission, Information Analysis, Portal Creation (Can open portals to other universes), Invisibility, Illusion Creation, Duplication (Can create copies of the ring), Summoning of other Green Lanterns, Memory Manipulation, Life Manipulation (Absorbed and carried the life energies of 16 billion members of his race into his Ring through sheer force of will), Limited Ice Manipulation, Resistance to Mind Manipulation and Fear Manipulation (Green Lanterns are selected for their unfathomable willpower and ability to overcome fear, allowing them to resist the effects of Yellow Lantern Rings and similar attacks), Can construct temporary Green Lantern Rings to give to others

Attack Potency: Solar System level (He is one of the most skilled and notable members of the Green Lantern Corps, which should make him comparable to GLs such as Hal Jordan and John Stewart)

Speed: Massively FTL+ combat, movement and reaction speed (Comparable to other Green Lanterns, who can react in a nanosecond or cross the universe in hours)

Lifting Strength: Stellar (Should be comparable to John Stewart, who has able to move around the mass needed to form a solar system. GL Ring constructs have also been consistently shown to be capable of physically restraining Superman, albeit usually briefly)

Striking Strength: Solar System Class (Can harm people of comparable durability to himself with his physical strikes)

Durability: Solar System level (Comparable Green Lanterns have shown the ability to take hits from DC's strongest heavy hitters, such as Superman and Wonder Woman, among others)

Range: At least Interplanetary (Around 40 AUs)

Intelligence: Likely Extraordinary Genius (Regarded as one of the most brilliant minds on his home planet, whose population was in the tens of billions. Master of many different fighting styles and one of the most skilled warriors in the entire Green Lantern Corps)

Weaknesses: GL Rings hold a limited charge and need to be replenished by a Power Battery every so often. If the user is stripped of his willpower, the Ring is useless. If a user is somehow overcome by fear, they will be unable to use the Ring and will become vulnerable to the color yellow. If a Green Lantern loses concentration (i.e. via being knocked around, illusions, constant speech), their power will be dampened and their constructs may weaken or fade completely.