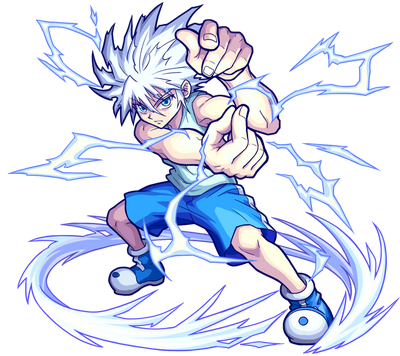 Killua Zoldyck (キルア=ゾルディック, Kirua Zorudikku) is the deuteragonist and best friend of Gon Freecss in the series Hunter × Hunter. He is the middle son of the Zoldyck Family.

Age: 12 at the beginning of the series, 14 currently

Superhuman Physical Characteristics, Analytical Prediction, Power Reading (Killua can estimate how powerful a target is with a glance), Master Hand-to-Hand Combatant (Killua is an exceptional melee fighter and master of many unarmed combat techniques), Pressure Point Strikes (He can knock people out with slight grazes to the neck, a completely superhuman feat), Acrobatics (Killua has demonstrated exceptional agility, balance, and coordination. He can fight extremely proficient in mid-air), Weapon Mastery (Killua is implied to be adept with firearms, and is most adept with yo-yos that weigh fifty kilograms. He is also highly skilled at improvisation, as he was able to defeat Bopobo, a man many times larger and taller than him, with nothing but liquor and a spark of electricity), Stealth Mastery (Melody stated that Killua's footsteps are the quietest she has ever heard, Killua practiced shadowing since the age of three), Accelerated Development (Much like Gon, Killua's potential is described as bottomless and terrifying. Intellectually, physically and with Nen, his talent can only be found in one in ten million, he can pick up new teachings near instantly and has the most potential a Zoldyck has ever had in history), Body Control (Killua can dislocate and reset his joints on a whim, and can turn his hand into a claw), Statistics Amplification (Killua has an "assassin mode" which increases his capabilities), Afterimage Creation and Limited Illusion Creation with Rhythm Echo (Killua can create afterimages that can act as decoys, these afterimages can fool those with Nen Senses), Regeneration (Mid-Low. Healed grievous injuries from the Ortho Siblings in two days), Resistance to Electricity Manipulation and Poison Manipulation (Due to his brutal and rigorous training, Killua has developed resistance to both electricity and poison), Immense Pain Tolerance (Killua can bear very intense physical pain without his physical or mental abilities being impaired. He was tortured by Milluki for several weeks straight, found it amusing, and eventually fell asleep. He can withstand one million volts of electricity and only feel mild pain. He was able to formulate a plan while being grievously wounded by the Ortho Siblings including several organs)

Improved Power Reading (Now with Nen, Killua could read the powers of those he underestimated before such as Hisoka and Isaac Netero) and Limited Nen Manipulation (Transmuter; Killua is a Nen prodigy much like Gon being a one in ten million rare talent. He can use the four primary techniques and one advanced technique, Gyo)

All previous abilities vastly improved, Transmutation (Killua can transmute his aura into electricity), Electricity Manipulation and Limited Durability Negation (Killua's Nen ability is to absorb, create, manipulate electricity. He can shock opponents through contact), Status Effect Inducement with Lightning Palm (Killua's electrical attacks momentarily stun opponents for a few seconds), Analytical Prediction and Improved Martial Arts (Learnt Shingen-ryu from Bisky; including techniques allowing to exploit opponent weaknesses [for example, their eyes or their necks] and shock their organs with palm strikes. He can now easily match and exceed Binolt in hand-to-hand combat. He defeated Sub, a much stronger opponent, without the use of his hands and laid various tactics in battle to create weaknesses for his opponent and anticipate them. Killua stated that tanks and fighter jets are nothing to him and later defeated a military unit comprised of at least four tanks), Improved Nen Manipulation (Was trained by Bisky and learned various advanced techniques. Which includes full mastery of everything including a limited version of En, though with the likely exception of In), Preparation (With preparation, Killua was able to make it so Gon who was vastly weaker than Genthru prevailed in their battle, using Nen techniques and items to counter his abilities)

All previous abilities vastly improved, Enhanced Fear Manipulation (Scared Rammot into paralysis him and caused him to hallucinate even though Rammot can use Ten), Improved Electricity Manipulation and Limited Durability Negation (Killua can now hurl electricity at opponents in the form of lightning, this lightning was able to paralyze Menthuthuyoupi who is vastly stronger and more durable), Instinctive Reaction with Whirlwind (By programming his aura to send a command directly to his brain, he completely bypasses the nervous system allowing him to react automatically ), Enhanced Extrasensory Perception (Killua's senses are honed to the point where he could sense Meleoron tailing him and Gon in a forest even while he was invisible and killed all his traces, he can also detect perfect Zetsu Users such as Tsubone)

All previous abilities with electric-based abilities enhanced, Electric Aura and Speed Amplification with Kanmuru (Killua can use his electric aura to boost his speed beyond what is physically possible. His entire body is encased in an electrical aura. All his attacks stun his opponent)

Attack Potency: Wall level (With claws he ripped a heart out of a Notorious Criminal, Johness, who crushed a part of a concrete wall with his grip. He also one-shot Bodoro, who was equal to an early Leorio), higher in Assassin Mode | At least Wall level (After learning Nen he could casually destroy thick walls to escape the Phantom Troupe hideout; Kurapika stated that merely learning the basics of Nen increases one's capabilities by several times) | Small Building level (Is physically stronger than a neutral Greed Island Gon), higher with Claws and Assassin Mode | City Block level (Can fight those who can harm him, casually tore off Rammot's head after removing Illumi's needle, could've defeated Shoot if the said needle was not affecting him), higher with Claws and Assassin Mode, possibly Multi-City Block level+ (Unfazed by the idea of fighting Illumi)

Speed: Subsonic+ (Comparable to Yorknew City Arc Gon, casually blitzes Peak-Humans, can create afterimages), higher in Assassin Mode | Hypersonic+ (Somewhat impressed Phinks Magcub with his speed, though Phinks could read his every move. Surprised Phinks with stones. At this point he is still slower than every member of the Phantom Troupe), higher with Assassin Mode | At least Hypersonic+ likely higher (Far faster than before), higher with Assassin Mode | High Hypersonic+ (He can dodge a bullet from 52 centimetres away from him shot by Ikalgo. Can blitz most Chimera Ant, including Rammot to the point where he didn't realize he had died. He was comparable in speed to Menthuthuyoupi), higher with Assassin Mode, High Hypersonic+, likely Massively Hypersonic with Kanmaru and Whirlwind (Far faster than in base, casually blitzed Menthuthuyoupi. Shaiapouf stated that even at full power he would have a hard time keeping up with Killua), Massively Hypersonic+ with Thunderbolt (Thunderbolt is electricity in the form of pure lightning)

Striking Strength: Wall Class (Ripped out Johness' heart in one swift motion) | At least Wall Class | Small Building Class (Stronger than a neutral Gon) | City Block Class (Can bisect massive trees with a single strike. Can casually mutilate Chimera Ants. Can match and harm Shoot even with the needle holding him back), possibly Multi-City Block Class+ (Without the needle he is unfazed with fighting Illumi)

Stamina: Immensely High (Ran beyond 80 kilometers without breaking a sweat. Fought Binolt for ten days straight. Killua was able to run and fight in NGL for 30 hours straight and did not exhibit signs of fatigue. Killua has incredible pain tolerance and can fight and train for hours without issue due to his upbringing, electric torture is meaningless to him, and defeated five hundred people in an instant without breaking a sweat)

Standard Equipment: Two yo-yo's that weigh 50 kilograms each, which can be used in conjunction with Killua's Hatsu as well

Intelligence: Gifted. Genius in terms of Assassination and Nen. Killua was trained since an infant to be one of the world's best assassins and was taught an array of assassination techniques, even those of supernatural nature. Killua's intellect far exceeds what a normal boy his age should be capable of and is smarter than most adults. He is knowledgeable on a wide variety of topics such as behavioral theories, technology, gaming, and he is a master darts player, suggesting part of his assassination training was general knowledge. He can formulate accurate predictions on his opponent's move and has proved to be able to analyze hostile capabilities and thought patterns efficiently. He can devise effective strategies in a matter of instants. Killua's years of experience can lead him to pick the best option, and he can keep his cool in dangerous situations. He is also highly observant and can pick up on details that would go unnoticed at the subconscious level. Killua is capable of devising sophisticated tactics as well as run accurate simulations and evaluate the success rate of each of them, even in the middle of a fight. His skills in evaluating the assets at his disposal and making the most of them are such that Gon and Biscuit were completely dependent on him to organize their Greed Island cards. Despite Knuckle being his senior and a combat veteran, Killua also presided the strategic meeting before the invasion of the palace. Killua is skilled in a variety of weapons and can improvise with tools of his environment and even turn others' weapons into their own demise, as seen against the various Chimera Ants and their attempt to ambush him, he even has great skill in the use of two yo-yos which earnt praise from Shoot. He is also an outstanding talent in the field of Nen being able to distribute it with a margin of error lower than 1%, which requires the most skill and experience. He is normally regarded as more talented than Gon when it comes to Nen control.

Weaknesses: Killua needs to charge himself by absorbing electricity in some manner, which he has done through a tazer and electrical sockets, to use his Nen abilities, and he can run out of electricity if he overuses his Nen abilities, forcing him to take additional time to charge up, Kanmaru (Godspeed) has a time limit. Zetsu involves keeping one's aura exclusively in the body, it makes a Nen user more vulnerable to physical and Nen attacks, because one doesn't have any aura on the outside of one's body to protect oneself.

Muscle and Joint Control: Killua can dislodge his joints at will in less than a second. He demonstrated this ability by dislocating his shoulders, elbows, wrists, and fingers to free himself from Machi's strings.

Rhythm Echo (肢曲しきょく, Shikyoku): An assassination art, the Rhythm Echo is a motion that creates an afterimage of the body through a varying cadence of steps. There is a total absence of noise during the movement and multiple phantoms.

Assassin Mode: Killua can enter a state of heightened concentration in which he focuses entirely on killing the enemy, preventing himself from hesitating. According to him, there is a sensible difference between his power in this state and with his usual mindset. 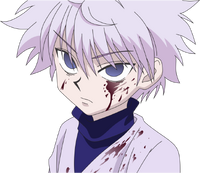 The Snake Awakens
Add a photo to this gallery

Tao Pai Pai (Dragon Ball) Tao Pai Pai's Profile (Speed was equalized. Both were at their 8-B versions)

Tanjirou Kamado (Kimetsu no Yaiba) Tanjirou's Profile (Speed was equalized. Both were at their 8-A versions)