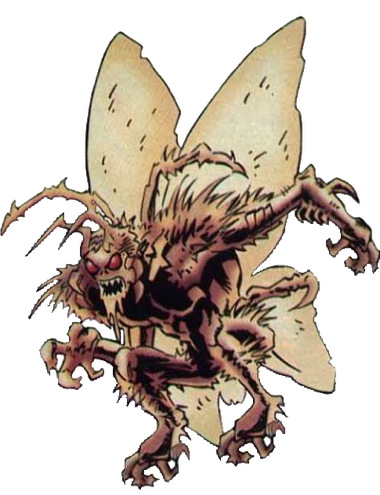 Having decided that the lawbreakers of Gotham City needed a costumed protector just as honest citizens had Batman, Drury Walker emulated the Dark Knight in every way, copying his paraphernalia and building on his legend to create his own super villain identity, The Killer Moth. He eventually came to resemble a dark mirror image of Batman, even adopting the alter ego of a wealthy philanthropist similar to Bruce Wayne. Moth was motivated by greed rather than justice, and only served the criminal underworld for a price.

Attack Potency: Small Building level+ (Should be comparable, but physically weaker than Batman, Can fight off Batgirl (Barbara Gordon)) | At least Small Building level+, likely higher (Far stronger than before, Can overpower Robin (Tim Drake), and requires the combined efforts of both Robin and Nightwing to restrain him)

Intelligence: Above Average (Despite being somewhat of a joke, Killer Moth is a good marksman and flyer, and is stated by the Bat-Computer as an accomplished Hand-to-Hand Combatant) | Below Average, possibly Animalistic (Speaks only in simple terms, and operates on survivalistic notions)

Weaknesses: Cannot tolerate anyone making fun of him | None notable

Key: As Killer Moth | As Charaxes

Retrieved from "https://vsbattles.fandom.com/wiki/Killer_Moth_(Post-Crisis)?oldid=6748031"
Community content is available under CC-BY-SA unless otherwise noted.