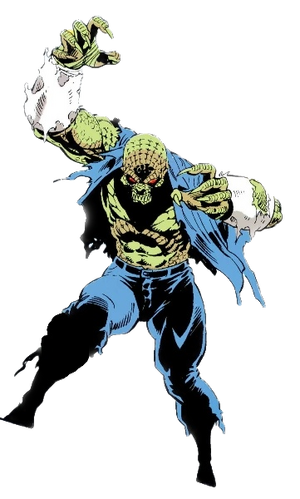 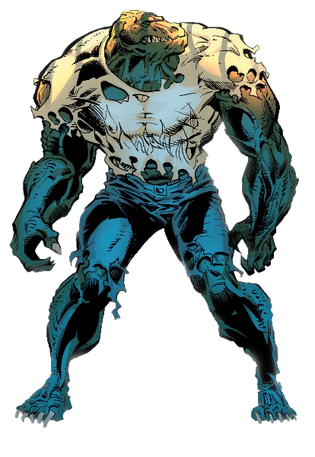 Waylon Jones, a.k.a. Killer Croc was born in a slum in Tampa, Florida. He was born with a skin condition that made him resemble a humanoid crocodile, hence his name which he got in the circus. His mother died in childbirth, and his father abandoned him. Waylon was raised by his aunt, but her persistent drinking prevented him from growing up in an ideal household. As a teenager, Waylon had no friends, and was the object of ridicule of those who knew him. He went to prison for all the crimes he committed against those who couldn't keep their mouths shut and made comments about his condition. By the time he reached adulthood, Waylon found work wrestling alligators. It was at this point that he began referring to himself as Killer Croc. Even then, his strength level was greatly beyond that of a normal human. Croc soon realized that there was more money to be made in crime, so he set out to become Gotham's most powerful underground figure.

Batman foiled each of his plans and locked him in Arkham several times, until Killer Croc essentially went insane, having visions and nightmares related to Batman and many others mocking him in his dreams, plus being experimented on in Arkham. Each defeat only made him worse and after a short encounter with the villain Bane, who broke his arm, he became a cannibalistic rampaging wild man with no regard for human life, while still keeping some of his humanity, to a certain degree.

Though originally just a human with skin disease, he began to mutate over time, developing a more reptilian physiology, with a three-chambered heart, permeable skin, buccal pumping to augment axial breathing, a proto-diaphragm for lung expansion, etc.

On a grand scheme to take Batman down, the supervillain Hush implanted a virus in Croc that caused his body to devolve into a more primal and reptilian state, making Croc's life even more miserable. His mind was healed, but he remained a dreaded monster because the virus was pretty much incurable, leaving Croc forever to be shunned by society.

Age: 30s to 40s, possibly older (Similar age-wise to Batman and started his criminal career at a little over 34)

Powers and Abilities: Superhuman Physical Characteristics, Martial Arts, Stealth Mastery (Mostly in the sewers), Resistance to some Poisons (Puke grenades didn't affect him and tear gas only pissed him off), Natural Weaponry (Sharp teeth and claws), Enhanced Senses (Was able to detect and pinpoint Bane's location through the many smells in a sewer) Regeneration (Low-Mid, After biting his own arm off for the sake of nutrition, it began to regrow in the following days) | All previous abilities enhanced (Bit off his own hands and they regrew in slightly over a week. With only a small trace of someone's scent he was able to find them across Gotham)

Attack Potency: Building level, possibly higher (Knocked out an off guard Batman with a single punch in the back of the head, tore apart a jail cell made for regular prisoners, ripped or busted open a metal door, did something similar with an elevator's metal frame, can easily punch through glass, walls and even the roof of a train, bit off Aaron Cash's hand and part of his arm, bit through Batman's cowl, killed two other meta-humans, snapping the neck of one of them, killed a bull with a single punch) | Building level, likely higher (Much stronger than before, busted out of a cell for his unmutated self, scratched through his own skull, his own jaws are strong enough to bite through his tough hide)

Speed: Massively Hypersonic reaction/combat speed (Comparable to his previous state despite the increase in insanity, could keep up with venomless Bane, sneaks up on Batman while he's talking with Ivy, caught one of Batman's kicks and threw him into a sign, even with a bad leg he can catch Batman off guard, Supergirl complimented his speed, given his size, kept up with Katana underwater) | Massively Hypersonic reaction/combat speed (Faster than before according to himself and Batman as he caught one of Robin's kicks from behind, called Batman slow, faster than Catwoman), Unknown travel speed (Shoulder tackled the Batmobile and made it crash)

Lifting Strength: Class 5 (Flipped a car upside down, sent a moderately sized gator flying, lifted several wooden crates including a big one that was quite heavy even for him) | At least Class 5 (Easily lifted a car over his head and threw it off-screen, tore a bank vault door off the vault, easily lifted Solomon Grundy's 1000 lb body with his jaws)

Durability: Building level, possibly higher (Fell a good height and shrugged it off, tasers didn't hurt him, Robin (Tim Drake) sneak attacked him with a metal bar to the back of the head and all it did was break the bar, survived a punch from Supergirl which sent him flying though it left him knocked out, survived a tackle from an angry Aquaman, chose to fall off a 52nd floor into the water and has survived and shrugged off a few huge falls off buildings, Axe-Man's axe bounced off his hide as if it were made out of metal, tanked this huge crash, as shown during this fight with Harley Quinn, his skin is at least few centimeters thick) | Building level, likely higher (Explicitly stated to be tougher than before, and Batman even needed an explosive to take him down, tanked gunfire from what appears to be a modified Apache's gatling gun)

Stamina Extremely high (Comparable to Batman, Batman used a spear-like metal fencepost to stab him but Croc pushed it on Bats himself, stabbing him with the other end, climbed 52 floors non-stop by sticking to the side of a building with his claws, repeatedly got stabbed from Katana underwater and kept on fighting, feelt nothing after Huntress shot three arrows through his arm, ignored bullets strong enough to penetrate his hide) | Extremely high (Replicated a similar feat from earlier, climbing up a skyscraper with his claws, scratched his head until he reached the brain and then ran across Gotham towards the one responsible for turning him into a puppet, bit his own hands off in order to escape from Arkham)

Intelligence: Very insane, ranges from Below Average (Has shown signs of slight speech impediment) to Above Average (Could keep up with Bane and even broke his venom device and snuck up on Batman once, defeated Huntress underwater and trapped her there so she could drown, all while under the effects of the Joker virus which slowly killed whoever had it, tried to convince Creeper that he was just as much of a freak as him and that he should free him, Wonder Woman finds his fighting expertise valuable) | Ranges from Below Average to Above Average (Though his mind became consumed by hunger and he's still a bit thuggish, he's shown some signs of intelligence, like when he set up a trap for Batman  or when he escaped Arkham by biting his own hands off)

Weaknesses: Extremely aggressive and deranged to the point of acting in animalistic ways.

Waylon once he grows insane and feral

Waylon at his most primal and savage 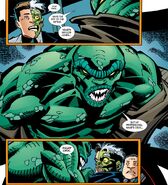 Bane's motivation, before they gave it to Bane

Croc's first depiction as a cannibalistic thug of low intelligence

Post-Hush Croc among the other villains, by Jim Lee

Post-Hush Croc's first appearance
Add a photo to this gallery