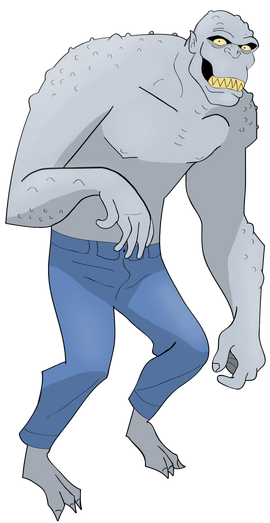 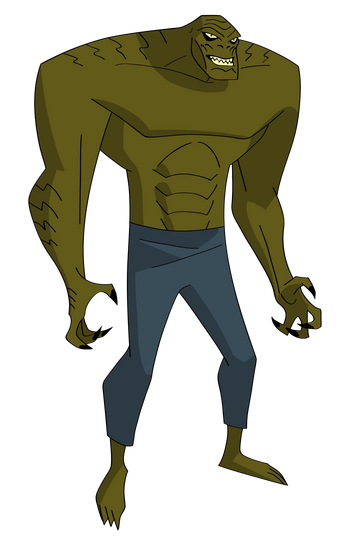 Morgan, better known by his professional ring name Killer Croc (a name based on his skin condition which made him grew reptilian-like scales, which later worsened), was a former pro wrestler from Miami who moved to Gotham City to establish himself in the underworld.

Croc was eventually arrested by Harvey Bullock, but some time later he escaped prison and sought revenge against Bullock. Croc tried to frame Detective Bullock for a crime, but Batman uncovered the plot and captured Croc, clearing Bullock's name. Croc was subsequently arrested but has escaped multiple times since, almost always successfully robbing a lot of money.

He was recently approached by Amanda Waller to become a member of Task Force X (the Suicide Squad).

Powers and Abilities: Superhuman Physical Characteristics, Expert Wrestler, Natural Weaponry/Crocodilian Physiology (Can remain underwater at will without sinking or rising to the surface and hold his breath for an extended period of time, after his mutation his cell at Arkham got turned into a water tank), Weapon Mastery (Learned how to use a rifle almost instantly), Disguise Mastery (Perfectly impersonated Bullock in order to frame him for a crime)

Attack Potency: Small Building level (Stronger than Batman), higher with jaws (Destroyed polycarbonate alloy handcuffs that were made so he couldn't break them) | Small Building level (Should be just as strong as before, can effortlessly smash through walls and can tear through armored cars with ease), higher with jaws (Turned Batman's batarang into scrap)

Stamina: Extremely high (Even after being hit with a tranq dart, he was able to perform impressive feats of strength)

Standard Equipment: None (Not even during heists)

Intelligence: Above Average (Though brutish, he is a former wrestling champion capable of outsmarting the police and even Batman on multiple occasions, and his intelligence doesn't change as he mutates even more)

Notable Attacks/Techniques: Multiple wrestling moves of many kinds and occasionally his very own jaws

In Batman: The Animated Series

Croc in his wrestler outfit

In The New Batman Adventures

Official Character Design (TNBA)
Add a photo to this gallery

Retrieved from "https://vsbattles.fandom.com/wiki/Killer_Croc_(DCAU)?oldid=5985982"
Community content is available under CC-BY-SA unless otherwise noted.