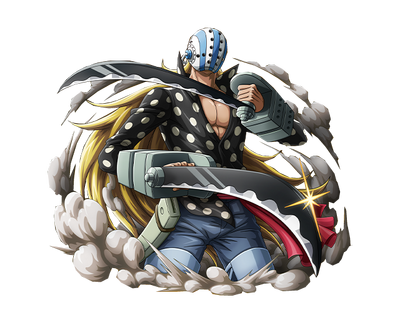 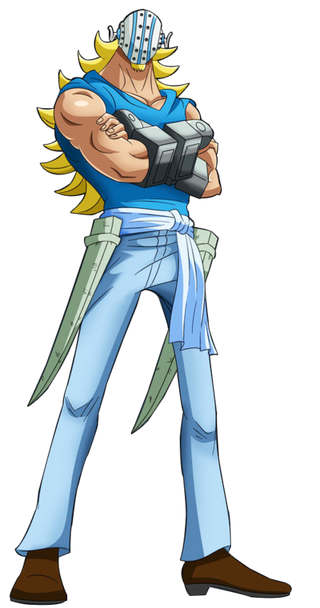 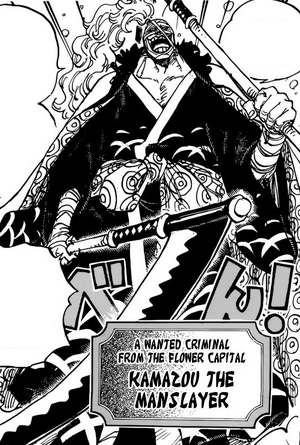 "Massacre Soldier" Killer is a pirate and subordinate of Eustass Kid. He is one of twelve pirates who are referred to as the "Worst Generation" (formerly known as the "Eleven Supernovas"). After the timeskip, his bounty has been raised from 162,000,000 to 200,000,000.

After Doflimango's defeat at Dressrosa , Killer was seen dining with Kid, Hawkins, and Apoo. After reading the news of Luffy and Law's victory, they figured that Luffy and Law were after Kaido. Killer revealed that the target of the Kid's alliance is Shanks.

Attack Potency: Likely Mountain level (Traded blows with Wano-arc Zoro [who was restricted to Two-Sword Style] and managed to pierce completely through his shoulder with a two-armed swing with his sickle)

Speed: At least Massively Hypersonic+ (Avoided several of Zoro's attacks and kept pace with him even after Zoro started getting serious)

Durability: Likely Mountain level (Could block attacks from Zoro and keep up a good fight for some time, but was utterly outclassed by Zoro once he used Three-Sword Style and Haki)

Stamina: Above Average (Incredibly agile and can keep up in a heated duel for some time)

Standard Equipment: Scythe Blades and wrapped bandage across his face

Intelligence: Accomplished and battle hardened fighter, and kept up a ruse of being a mere criminal despite actually being a hired arm of Orochi's.

Weaknesses: As a failed SMILE Devil Fruit user, he cannot swim and becomes immobilized if more than half of his body is covered in water, as well as only being able to express happiness.

Note: This profile covers only the feats done until the Wano arc, skipping the Pre-Timeskip events due to the lack of feats Killer had at the time.

Retrieved from "https://vsbattles.fandom.com/wiki/Killer_(One_Piece)?oldid=6019409"
Community content is available under CC-BY-SA unless otherwise noted.