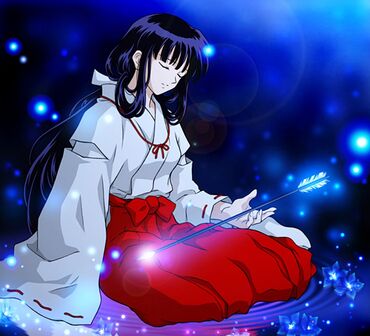 Kikyo was a very powerful priestess during the Sengoku jidai and, at one time, Inuyasha's main love interest. She was entrusted by the yokai taijiya to guard and purify the Shikon no Tama. Along with her younger sister, Kaede, Kikyo dedicated her life to protecting the jewel, slaying many demons in the process and thus could not live a normal life like other girls.

Tier: 10-A physically. At least Low 7-B with purification arrows

Attack Potency: Athlete level physically. At least Small City level against demons & evil spirits with purification arrows (These arrows are capable of harming the likes of Inuyasha and Naraku)

Lifting Strength: Athletic Human (Requires athlete class lifting strength to quickly pull the string on a bow and launch arrows with the kinds of speeds seen from Kikyo)

Durability: Street level physically. Small City level against demonic and spiritual attacks (Her purification powers have allowed revived Kikyo to survive being impaled by Naraku and falling into a river of his miasma)

Stamina: High. As a spectre, her endurance is far above that of any normal human. She survived a large hole in her torso which was the result of Naraku impaling her an also survived exposure to his miasma. Even during her previous life, she managed to walk seemingly kilometres despite being grievously wounded and muster up enough power to seal Inuyasha.