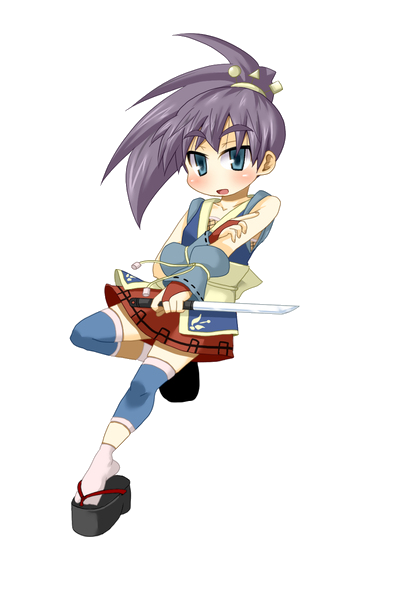 Kiki is a Playable Character in Wonderful World. She is at the end of the shelling family. Recently, since the world has become peaceful, her kin live ordinary lives as usual for ordinary people. The daughter of the spring leaves family who lives with youkai, but it is typical that they are on good terms with each other. It is a role playing a partner of badness by acting together well. Kiki adores a cool ninja, she usually behave cool, but she is a little crybaby. As soon as unexpected things happen, Kiki will start a penetration with teary eyes. she is extremely anxious about the low height and she is wearing thick bottom clogs to show it even a little. Suddenly, she was brought to Sasari, she was brought to a foreign ship, and came across the continent while she could not understand her translation. Since the stowaway broke and one person was caught, it is now released, acting looking for a staggering Sasari.

Name: Kiki Sayabasiri (Yuuko Sagaki when referring to her in Kanji.)

Intelligence: Average (Sasari is smarter, and Kiki is just a student.)

Feats: Kiki is very powerful physiques wise, has a wide array of moves, and is a prodigy as a Kunoichi.

Retrieved from "https://vsbattles.fandom.com/wiki/Kiki_(Wonderful_World)?oldid=4616688"
Community content is available under CC-BY-SA unless otherwise noted.