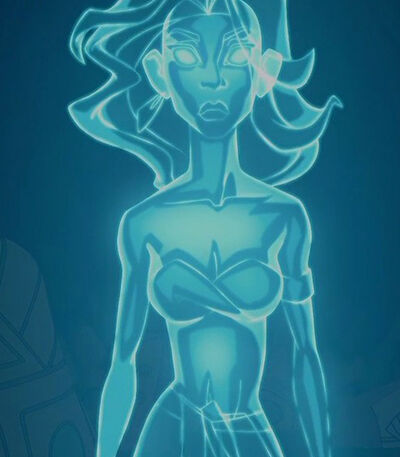 Kidagakash Nedakh, or Kida, is the Princess of Atlantis, and the deuteragonist in Disney's Atlantis: The Lost Empire. She is adventurous and a skilled fighter, able to overpower soldiers and mercenaries with unarmed combat. She is the heir to the throne of Atlantis, and as such, the Heart of Atlantis is able to bond with her in times of great need, granting her immense power at the cost of her individuality. While the power granted by the Heart is great, it will come at a cost, and if she is not freed from the influence of the Heart in a short time, she will be consumed by it. While this will not "kill" her in the conventional sense, she will return to the Heart and become part of its collective consciousness. Alongside Milo, she is able to overcome any obstacle in her path in order to protect her people and her city.

Powers and Abilities: Superhuman Physical Characteristics, Healing, Longevity, Weapon Mastery, Skilled unarmed combatant, Able to bond with the Heart of Atlantis | All previous, Energy Manipulation and Protection, Levitation and Flight, Telekinesis, Forcefield Protection, Able to turn objects and people into crystal (Despite being turned into a crystal, the person affected retains movement, though they can be shattered), Able to cool lava instantly, Life Manipulation (Her presence gives life to her people and Atlantis itself; without her as their source of life, they will die)

Attack Potency: Street level (Wields a spear, able to knock out adult mercenaries with ease) | City level (Is one with the Heart of Atlantis, which was able to sink the city under the ocean)

Speed: Superhuman (Should be comparable to Milo Thatch, who is able to outrun 1914s cars on several occasions) | Unknown, likely higher (Should be superior to her previous form by an unknown degree)

Lifting Strength: Unknown (Able to move in large ceremonial garments and masks of unknown weight unimpeded, able to throw an adult man) | Unknown, at least Class 25 with Telekinesis (Lifts the components of a large iron cage and several large stone pillars, while first bringing the pillars directly through a large amount of earth)

Durability: Street level (Should be able to take hits from those comparable to herself) | City level (Projected the field that protected the city from the aforementioned cataclysmic events)

Stamina: High (Is never shown to tire despite large amounts of physical activity and extended periods of swimming and diving) | Unknown, possibly Limitless (Provides the energy that the city uses to survive; should not run out of this power)

Intelligence: High (Knows nearly all languages; nearly on par with Milo in deductive reasoning, yet is unable to decipher what he is able to; is over 8,500 years old, and thus is extremely experienced) | Unknown, likely far higher (Possesses the knowledge and wisdom of all previous kings and rulers of Atlantis)

Weaknesses: None notable | Given time, her individuality will be lost, and she will return to the Heart of Atlantis. Can be put into a catatonic state if contained.

Key: Base Kida | Bonded with the Heart of Atlantis

Retrieved from "https://vsbattles.fandom.com/wiki/Kida?oldid=5296676"
Community content is available under CC-BY-SA unless otherwise noted.